Our latest installment of Quick Bites brings us to Ridgewood for some damn fine food.

THE VIBE
Unglamorously located under the M train by Ridgewood's Seneca Street station, Garam Masala is about as basic-looking a restaurant as you'll find. The large singage outside tries to impart some personality, and the frontage onto Palmetto Street is all windows, but the elevated tracks, as is their wont, overwhelm everything in its path. Inside, you'll find bright wall hangings and a gold wallpaper warming things up around the seating area, which can handle around 20 guests.

What Garam Masala may lack in beams of sunlight, however, it more than makes up for in hustle and the care put into the service and food. The owner here is Saiful Islam, and though this is his first restaurant, he's worked for many years in the hospitality business, previously managing Tandoori Masala in Bushwick, and Mahal Kita in Williamsburg. Islam was working the floor during both my meals over the weekend, refilling my water glass and running plates from the kitchen.

One thing Garam Masala does need is people to come in and sit and eat. Although a few deliveries went out while I was there on both Friday and Sunday evenings, only one other table was ever occupied in my three total hours of feasting. I don't mind dining alone, but it's hard to overcome the dispiriting air of a completely empty restaurant, particularly one that is serving up good food.

THE FOOD
The Garam Masala menu is five pages and nearly 100 dishes long, and both times when I asked for suggestions my server recommended an additional, off-menu special. It's a lot, but prices are moderate enough that you can spread your selections around a bit. My favorite was one of those specials, which he called the Garam Masala Chicken, a crock of remarkably tender white meat in a luxurious sauce, the whole dish alive with the restaurant's housemade, namesake spice. It came with my choice of Flavored Rice, which turned out to be coconut (there's also tomato, mint, lime, jeera, kashmiri), and it was one of the best things I ate last week.

Also excellent was the Rack of Lamb in the Tandoori section, three perfectly-prepared ribs in a tangy white marinade, the tomato-y peppers, potatoes, and onions offering a pleasant counterpoint to the funky lamb. And if you want something that'll make your forehead sweat, the Lamb Vindaloo really brings the heat without sacrificing the flavor of the meat. The kitchen crew knows how to cook fish properly as well, as evidenced by the hefty chunks of Goan Salmon swimming in a thick coconut curry.

The two ancillary dishes I tried were less successful than the above. The Spicy Naan, one of twelve bread options, had so much going on—malai chicken, onion, chili, cilantro, masala—that I couldn't really tell what it tasted like, though the texture wasn't bad. Probably something simpler is the way to go here. The Yellow Daal just fell flat. I definitely recommend the Combination Platter of vegetarian appetizers, however, as all three elements—a well-stuffed Samosa, a crisp Onion Bhujia, a slick Paneer Tikka—delivered on their respective promises.

THE VERDICT
Garam Masala is a good neighborhood restaurant hiding in an unremarkable body, a small business that cares deeply about what it's doing but needs some help. Ridgewood residents should really support this place and bring some energy to the dining room. I promise the food will make you happy. 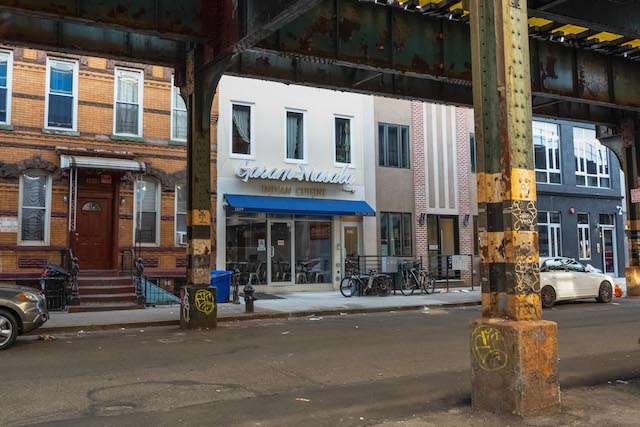 #garam masala
#quick bites
#ridgewood
Do you know the scoop? Comment below or Send us a Tip