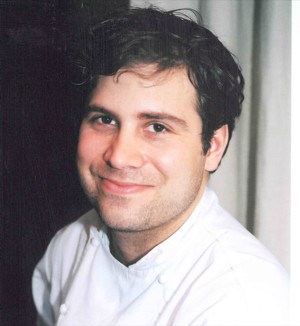 Galen Zamarra was born to doctor parents in Switzerland, who fittingly named him after the ancient Roman physician. As a teenager, Zamarra decided to take up cooking, and now the thoughtful 33 year-old is the chef-owner of Mas (farmhouse) in the West Village. Last month, Mas received an impressive 28 points for food in their listing for the 2009 Zagat Guide, one of only ten area restaurants in the area with such a score. Zamarra will be cooking a dinner at the James Beard House in January, and is involved with Slow Food USA’s ongoing educational programs. He spoke with us a few weeks ago in Mas’ dining room about modern European cooking technique, building a better-tasting baby food, and organizing a human shield to protect J-Lo.

Where do you consider the food you cook here to be in the restaurant spectrum? Well, the menu is what we call French and New American. It has a solid basis in French cuisine, but we incorporate all sorts of other countries' influences. The concept at Mas is seasonal and ingredient-driven. We source almost completely locally, mostly from small production farms and everything is prepared simply, with an emphasis on good technique. I like to let the ingredients speak for themselves. Otherwise, David Bouley was a huge influence on me, as were the number of places I worked at in France.

I heard you had a not so good experience at one of your stages. That was at Georges Blanc. I was there for a month— they have 20 or 30 stagiaires at a time, and I stood in a corner peeling little carrots. The food was uninspiring and the whole month I was there I didn't see the chef once. That was when I was about 20.

Didn’t you work for Michel Bras as well? I staged there too, and it was really wonderful. It's a seasonal restaurant in the middle of nowhere, and in the wintertime it closes. It's pretty amazing. I went there the last month of the season and then was supposed to go back when he reopened, which is when I went to L'Arpège. I had visa problems, I think Michel Bras lost a lot of visa people that season so I ended up staying at L'Arpège for about a year and a half. I worked a number of the stations there and it was a wonderful experience too - a great work environment.

You were born in Switzerland? My family just lived there temporarily, and then moved to Santa Cruz. My family's all from New York so we actually moved back here to the city and then to California. My parents were both doctors; they went to med school in Buffalo.

Can you walk me through a dish on your menu right now? The tomato confit [tomato confit stuffed with pine nuts and basil, summer truffle and hazelnut oil vinaigrette] is a good one to talk about. It's autumn right now, so tomato season is pretty much over. But at the restaurant it's all about extending your season. The tomatoes here are grown in a greenhouse up near Saratoga. During the summer, I would never use a greenhouse tomato. That’s we get field tomatoes, mostly heirloom, and prepare them very simply. But this is a way to have something more than cabbage and potatoes on the menu: what I do is cook the tomato really slow for a long time, which brings out the sweetness which it lacks in its raw state. Then we stuff it with diced tomatoes, toasted pine nuts, basil, and roast it again. I put some fennel pollen on top, then dress it with a hazelnut and summer truffle vinaigrette.

I understand you're a new father? I have a daughter who is 18 months old, and another due in a month.

Tell me about your Slow Food for babies class. That was fun. Slow Food NYC has Slow University, which is trying to do more educational classes focused on cooking at home. A year ago I started noticing that most baby foods available are pretty much garbage and I also noticed that most of my friends with kids don't know how to make baby food. I thought it would be a great class for new parents: how to make their own food and what the benefits are.

What goes into that? I'm guessing there's a puree factor. We did different stages, starting with purees and moving up. One thing I did was I got a jar of Gerber pureed peas and Earth's Best Organic peas and then I made my own pea puree.

Oh god. Did you make people eat it? Yeah. I wanted people to taste the difference. People ask, oh why won't my baby eat this? I say, look, it's because it's gross. Baby food in general is so gross that you don't want to eat it and it's brown and it doesn't have any nutrients. And the homemade puree is good. It's funny to see people's reaction especially to the organic brands that are still garbage and basically taste bad but have a higher price point.

Do you season baby food? Yeah.

For grown-up food, do you have a favorite cut of meat? I like cooking a good steak, and I'm partial to a rib-eye.

Do you have any 4 a.m. food recommendations? I don't go out so much now that I have a kid but a place I like in the neighborhood is Blind Tiger, which serves food until 2am. I can a usually grab a bite after work there.

What’s your advice for young cooks, and do you take them right off the street? I like new cooks who are just starting off because I was like that once and because you learn a lot working in a kitchen, not in a culinary school. The food here is very simple and it's important that people pay attention and follow all the steps because if you don't, simple can become boring really quickly. And people are paying a lot of money for food so they want someone paying as much attention in the back as they are when they're eating with it.

Do you have an only in New York story? Something funny happened here just a couple of weeks ago. Jennifer Lopez and Marc Anthony just came in for special occasion— they had a cake that said congratulations on it, but other than that were very low key. They had a bunch of bodyguards with them, of course, who were making sure no one took their photos and it stayed very low key, and we were doing our best to accommodate them. But there was one table seated close to the front door who kept wanting to go up and talk to them, and we had to keep telling them to please leave them alone because they didn't want to be disturbed. They basically decided to camp out all night here because when Jennifer and Marc left they'd have to walk past them, so that would be their chance. When Jennifer and Marc were leaving, we made a human shield with the waiters so they could leave easily but as soon as they stood up, one of my dishwashers popped out of the kitchen and was like, ‘Oh my god! I'm your biggest fan! Can you sign an autograph?’ It was hysterical because we were so going overboard to give them privacy and then, bam. Game over.