Hungry pizza lovers, some of whom spent $75 each to attend the New York City Pizza Festival, are demanding refunds for what they're calling a "total scam" that had them waiting over an hour to enter a "shady parking lot" for empty tents and barely any food. And there's a familiar name attached to Saturday's widely panned event: the organizer is allegedly one Ishmael Osekre, the man behind last summer's "EPIC DISASTER" African Food Festival.

"It was like the people from Fyre Festival decided to throw a pizza party," quipped Connell Burke about the Pizza Festival, referencing the infamous luxury festival that promised supermodels and Ja Rule and instead delivered disaster relief tents and slices of cheese, and an indefinite stay on a Bahamian island.

"It was my girlfriend's birthday so I got the VIP tickets, so I spent $150 total for the two tickets," Burke told Gothamist. "There's three pop-up tents to my left, one where they're taking cold pizzas out of delivery boxes and cutting them. Those pictures don't do it justice, because they look like they're normal-sized plates but they're actually cake-sized, like what you'd use for cake at a children's birthday party. They're small, tiny little slivers of pizza."

The event, which took place in a parking lot on Flushing Avenue in Bushwick, was promoted as a "day long celebration of the dough, cheese, tasty sauces and delicious toppings." But attendees report they were greeted with "pizza...smaller than a sample size," according to one person on Facebook. "Cold and tasted awful."

"Total shit don't spend your money if you haven't yet, and if you have get a refund," festival guest Oscar Mendoza posted to Facebook. "Three small tents are here, paid $75 for a slice of pizza smaller then my palm."

"We came up all the way from DC and all we got was this slice," attendee Chip Shannon said of the above photo.

"This is bullshit! The fact that my friend and I spent 55 dollars each for such a shitty event like this unbelievable!" another said on Facebook. "All we got was warm red wine that tasted like ass!" 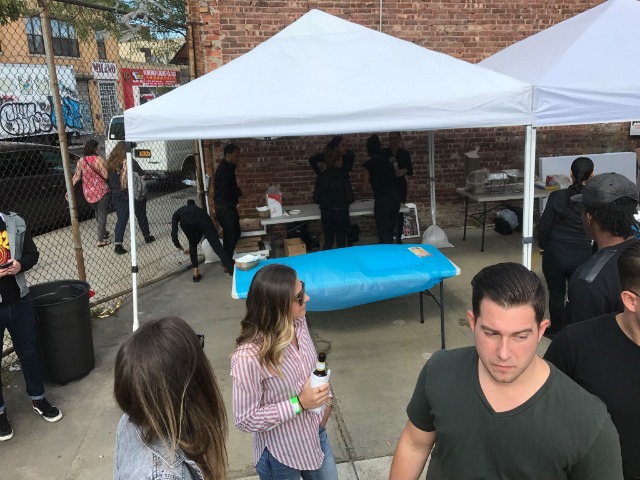 "Was supposed to start at 3, finally got in after 4 and this is what we found... a shot of all the great pizzas we sampled!" attendee Michael Redmond grumbled, describing the photo above.

"I imagined it would be like, Roberta's has a brick oven pizza that they tow, there'd be all these different vendors, all this different kind of pizza. And there was none of that. There was cheese and onion pizza," Burke continued. "We were only there for 10 minutes. I paid $150 bucks for this. I ate what was probably the equivalent of one piece of pizza, which was actually seven little slivers. And then we were just like, 'F*ck this.'"

This makes that African Food Festival look like utopia.

The Pizza Festival was billed to take place in two sessions on September 9th, including two sold out VIP sessions beginning at 3 p.m. and 7 p.m. The Eventbrite description of the festival doesn't mention any pizzerias or pizza-makers by name, an atypical exclusion from other walk-around tasting events of this nature.

To make matters worse, the event organizers also appeared to have sold tickets to a "Hamburger Festival," that was scheduled for the same exact time and place as the Pizza Festival. That event promised "mountains of french fries, oceans of ketchup and waterfalls of beer," with admission prices ranging between $35 and $69.

"This was a rotten scam, they promoted this as a pizza festival and a hamburger festival. People who arrived early said there were about 5 pies cut into micro slices of really bad pizza. There were no hamburgers!" reads a Facebook group called Pizza Festival Scam Victims started to organize attendees looking for their money back. "Clearly this is a scam and the organizers should be held accountable."

"Those people were sitting, waiting in line to get the burgers that were not there," Burke recalled. "And when they tried to eat pizza, the people were like, 'No, no, that's for the pizza people.'"

Some attendees were able to connect with festival organizers, who first blamed Hangry Garden—a company that in part provides rentals and event curation for pop-up events—for delaying the start of the event.

Jeremy Asgari, Hangry Garden's co-founder, denies that claim, saying his company was hired by Osekre to source a space and provide furniture and other amenities, and that he, too, was misled.

"We'd never worked with these guys before but we saw the response they got on Facebook, which was tremendous, 30,000 interested people. We didn't think this was going to be a subpar event," Asgari told Gothamist. "As we got closer to the event, things just didn't add up right. They didn't pay us the fee that we were supposed to get, they weren't honoring their deal with us."

Asgari said that on the Friday before the event, festival management didn't have money to pay Hangry Garden, but Asgari "gave them the benefit of the doubt" and decided to move forward in bringing trucks and furniture over to the lot. On Saturday, festival management still did not have the money to pay Hangry Garden, Asgari said.

"We couldn't be part of it, of course, because we're not going to do an event for free. We started getting the feeling that this wasn't the type of event they promised," Asgari said. "We showed up and they didn't have the food vendors, they didn't have anything. I asked them where the vendors were and he said, 'We had trouble finding them so we're ordering pizza to the venue.' I was like are you kidding me? They were supposed to have 30 plus vendors, this is a nightmare."

Aputumpu—described on Facebook as an "an archive of bands" that "throw[s] parties, concerts and festivals in Brooklyn" and listed as the event's organizer—later told the same attendee seen in the Facebook screenshot above that the "deliveries were just late mane [sic]."

"Timely delivery of food delayed the fun experience we all looked forward to," Aputumpu told a different attendee. "A make-up tasting will be announced shortly. We appreciate your patience."

Some guests weren't satisfied with assurances of a rescheduled event and have joined forces with those who bought tickets to the Hamburger Festival and begun organizing as a group to secure a refund.

Last August, Osekre organized the African Food Festival, which attendees also called a scam, saying there were only a handful of the promised "24+" chefs and vendors. To make matters worse, the Festival was staged inside the Duggal Greenhouse in the middle of a heatwave, with no air conditioning and prices for a bottle of water running between $3 - $5.

"Organizers should be charged with fraud," one attendee wrote at the time. "There is no way they did not know they were going to come up criminally short of what was promised several days before the event."

Neither Osekre nor Aputumpu replied to multiple requests for comment; the voicemail box of the alleged event producer was full. We'll update if we hear back.

#fyre festival
#new york city pizza festival
#pizza
#scams
#original
Do you know the scoop? Comment below or Send us a Tip