From Pickup Truck To Pulled Pork: How A Whole Hog Becomes Dinner Earlier this summer we were introduced to the Merpig, a fantastical pork creation being offered at this year's Pig Island pork out in Red Hook. Intrigued by this strangely-named dish, we decided to delve more into its creation, from a whole hog rolled in on a wheelbarrow to its immersion into a below-ground oven to the final tasty product served at the porcine-centric fete over the weekend. Below, the anatomy of a MerPig.

On Wednesday morning, Ben Schneider of The Good Fork and St. John Frizell of Fort Defiance traveled to Union Square to pick up the meat: two half hogs, locally-raised from Flying Pigs Farm, clocking in over 250 pounds. From there, they hauled the hogs via pickup to Red Hook, where they were stashed in Fort Defiance's walk-in fridge. On Friday, the duo—aided by friends Billy and Matt—hauled the hogs into The Good Fork's backyard, where they'd constructed a giant pit in which to cook the meat. 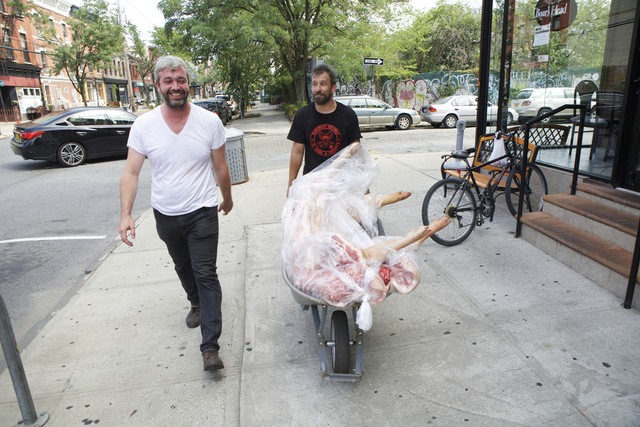 Before being entombed in a pit of fire and wood and stone, the pig—like all of us—needed a little TLC. "We created a gallon of brine and injected it in," Schneider explains. "It allows you to get the brine past the skin, which would be a barrier if you soaked it." Inside that brine were strong ingredients like fish sauce and chili peppers grown in the restaurant's backyard, plus sugar and other spices to help season the meat. "It's pretty standard procedure anytime people are doing an animal like that," he told us. Unless you want to sacrifice your bathtub for a few days, of course.

Once properly infused, the pigs needed an additional layer of protection from the heat, which is where the term MerPig originated. Kelp from the restaurant's fish monger and wet burlap sacks donated by Stumptown were wrapped around the meat and secured with rope. "The kelp and the burlap primarily give moisture to the product," says Schneider. "The kelp adds a little bit of salt, because it's got salt water on it, it's got a little bit of maritime flavor; but its primary function is that of a banana leaf in a traditional Hawaiian luau, which is to seal the moisture in. I think what happens in there is it bakes and it steams and it cooks in its own juices." 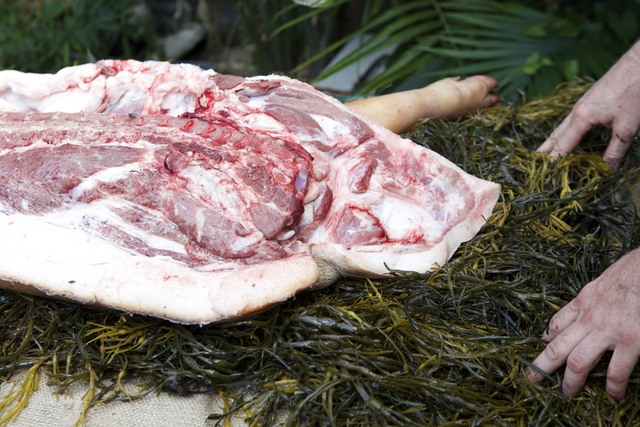 As a vessel for all that baking and steaming, the team used half an oil drum sunk into a pit, which they secured with concrete blocks and sand. Inside the piggy grave, the team built an enormous fire out of logs, eventually allowing the fire to burn down to hot coals. "The secret to the whole thing is building up a big thermal mass in that pit," explains Schneider. Mixed into the wood were river stones that pulled in the heat from the fire and contributed to the sustained heat that would ultimately cook the animal. The pigs were loaded in, a metal top was affixed and the whole thing was covered with sand for the overnight cook, which lasted around 18 hours.

"It's sort of a leap of faith. We seal it up, go home, go to sleep and hope it's cooked the next day," reveals Schneider. "The timing was determined by how quickly we could overcome our disorganization and get the pig in the ground and then how early we had to take it out in order to be at the event on time. Which is to say, it was a total guess, we had no idea. We just know that if we made a really hot fire, put it in there and sealed it up, it would hopefully be good and it was. In this particular case, we really hit it right." 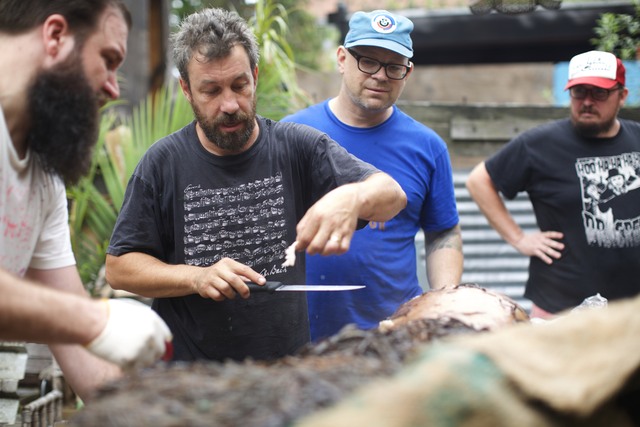 At yesterday's celebration of the pig, the team dished up the shredded meat in lettuce cups with pickled carrots, daikon, white rice and a Korean red chile sauce made with gelatinous pig's feet. The MerPig was honored with one of 10 awards given out at the conclusion of the event, hopefully guaranteeing a return at next year's Pig Island. "I will try and get it past the board of directors next year," Schneider joked. "By then, hopefully the memory of the difficulty will have passed and we'll be able to convince them again!"