Austinites have been queuing up for Franklin BBQ, the insanely popular smoked meat joint that took the Texas capital by storm when it opened back in 2009. Last month, John Avila, a Franklin alum, opened up Morgans Barbecue in Prospect Heights, bringing some of the Texas fervor up north to join the city's growing barbecue scene.

Like all proper TX BBQ, Avila slow smokes his meats in a special dry rub then serves them by weight or piled onto sandwiches. He's doing brisket, pork ribs and pulled pork, of course, in addition to turkey, beef ribs, chicken and sausage. Texas favorites like Frito Pie and Red Chile also make appearances along with sides like fully loaded baked potatoes, mac and cheese and collard greens. Adventurous eaters should definitely check out the "Turkey Tails"—exactly what you think they are—which are deep fried and served atop collard greens and spiced cornbread. 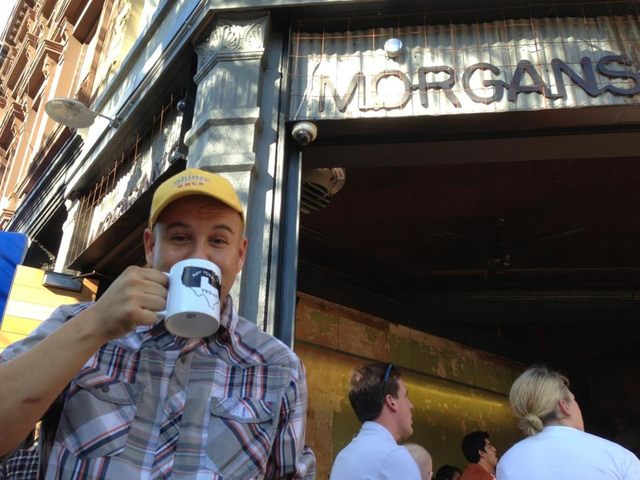 We chatted with Avila over email to ask his thoughts about New York's Texification and what BBQ spots he thinks best capture the flavors from his home.

What things are you doing differently at the new restaurant than your time at Franklin's and was the transition to NYC smooth? The recipes I've put together at Morgan's were recipes developed by my grandfather in the 1960s. At Morgan's, we hope to focus on Texas regional cuisine, offering Cajun influenced dishes from east Texas, Mexican influenced dishes from South Texas, and German/European influence from central Texas.

The transition to Brooklyn has been great, the people have been really nice and the feedback has been positive & encouraging. I've made many new friends and feel very welcomed.

Do you get a lot of Tex-pats who know Franklin's and are looking for that at Morgan's? A lot of Tex-pats come into the restaurant and are expecting authentic Texas food. Majority of our customers are either from Texas and moved to NYC to go to school/work or New Yorkers that went to school and are looking for that taste of Texas. This past weekend's viewing of the UT game was a perfect example of New Yorkers that went to school in Texas and Texans that moved to New York. The place was packed with Texas pride.

Are there any other NYC barbecue joints who you think "get it right" when it comes to TX barbecue? I'm a huge fan of Mighty Quinn's. There is definitely plenty of Texas influence there, but what stands out to me is the quality of the work that Hugh Magnum is putting out and the vibe.

Texas food and culture seems to be having quite a moment (Shiner, barbecue, honky tonk joints like Skinny Dennis). What do you think attracts New Yorkers to Texas? Or is it the other way around? Everyone has their perception of what Texas is and often times Texas is still very much a mystery to them (New Yorkers). It seems in recent years, Texas has started to gain more recognition in its food, culture, and economic status. It's definitely on the map now. Texas is a huge state and the cultural diversity is just now being shared.

When you're not chained to the restaurant, where do you like to eat? I had an amazing meal this past weekend at Mayfield's on Franklin Avenue. I also enjoy the paella from Socorrat. My neighborhood favorite is Basil's on Kingston, where you can get a great brick oven pizza and their basil gelato is kick ass.

#barbecue
#bbq
#franklin's
#interview
#john avilla
#morgan barbecue
#new restaurant and bar radar
#original
Do you know the scoop? Comment below or Send us a Tip