Things were pretty bleak for Buzzy Geduld when he first opened The Donut Pub in 1964, a humble spot, now oozing old-school charm, just west of Seventh Avenue on 14th Street. As the story goes, Geduld and his brother had both just been ousted from low-level Wall Street jobs, and decided to give the fried pastry game a try. Turns out Geduld loved the work, was pretty good at it, and so held on to the shop even after returning to the financial world in the late 1960s and, in 2000, even after selling the trading firm he had subsequently started for close to a billion dollars.

Now, for the first time in decades, the cult-favorite Donut Pub has expanded with a second, far snazzier outlet, located in the heart of NYU territory near Astor Place. Like the original, the new Donut Pub serves a huge array of its namesake pastries in varieties both classic (Jelly, Cinnamon Old Fashioned, Whole Wheat Glazed) and less so (Fruity Pebbles, S'mores, Birthday Cake). There's also a whole line of Cronut-ish Croissant Donuts, as well as related treats like Cinnamon Buns, Apple Fritters, and that old NYC stand-by, the Black and White Cookie.

New to the Astor Place Donut Pub are savory treats like Grilled Cheese and a Tuna Melt, and ice cream from il laboratorio gelato, which you can scoop on top of whatever pastry you want or just enjoy a la nothing else. Also new is the flashy design, with Insta-bait trappings like neon signs and a wall of shiny fake donuts before which you can hold up your real donut for a quick snap to feed your feed. The space itself is narrow but deep, with about 25 stools at various counters and some room to stand around those high tables. 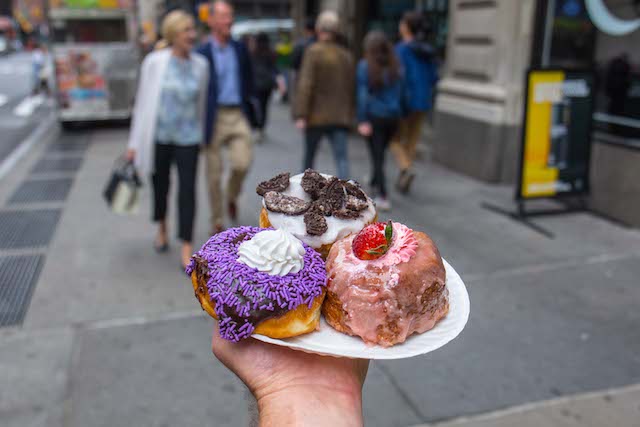 The Astor Place Donut Pub is located at 740 Broadway between Astor and Waverly Places and is open on Sunday through Wednesday from 6 a.m. to 11 p.m., and around the clock, 24 hours, from Thursday through Saturday. (646-974-1221; donutpub.com

#astor place
#donut pub
#donuts
#doughnuts
Do you know the scoop? Comment below or Send us a Tip