, who writes the Tao Jones columnist for the Wall Street Journal Online, observed earlier this week that FreshDirect sent an email promoting a new line of "quick and easy" food options, Stir Fry Kits. And, apparently in an attempt to make it more authentically Asian, "Stir Fry Kits" is written in what Yang calls that "cliche fake-brushstroke 'oriental' typeface that reflexively causes many Asians to cringe," which is called "chop suey lettering" while "Dumplings" is written in what's known as "chopsticks lettering."

Yang's friend had emailed FreshDirect to complain about their "unfortunate use of stereotypical typography" and how she was “disappointed by the laziness of using an outdated and unimaginative font in the logos to advertise the ‘Orientalness’ of  the cuisine." From Yang:

In response, a company spokesperson sent back an email that read, in part: “Thank you for taking the time to express your thoughts and share your concerns. [Why So Serious?] The FreshDirect creative team did not in any way intend to offend anyone with the use of the typography [We Didn't Mean Any Harm!], which was meant to echo a classic typeface found in many menus and takeout boxes [….Stop Being So Politically Correct].”

Interestingly, the spokesperson then went on to quote an article in Design Observer that the FreshDirect design team read and debated before deciding to go ahead with the chop suey/chopstick font choice. “[The article] says, ‘Clearly, some fonts are just too Western, and that’s where modification…can, when done well, can be extremely useful….And yes, it’s all about appropriateness: fine to use Fake Hebrew for a deli; not so fine on, say, a yellow armband. Likewise, nobody questions a sign for a burrito restaurant designed in Hot Tamale, but what about when it’s used for a border crossing sign in Texas?’ We agreed with this evaluation of ‘appropriate use.’”

Reached this week, FreshDirect PR manager Maria Coder added that “Our team gave this typeface a lot of thought before integrating it into our packaging and advertising.”

However, Yang points out that at the bottom of the cited Design Observer article, the writer notes, "Granted, unlike people, typefaces have no feelings — so who cares if they’re used without sensitivity and knowledge? But on some level, the line is a murky one: What’s the difference between a celebrity making an unforgivable racist remark and a typographer making a font that clumsily perpetuates a cultural stereotype?"

And Paul Shaw, design historian and School of Visual Arts professor, told Yang that the chop suey and chopsticks styled letters are usually linked to unflattering stereotypes, "You’ll see caricatures with slanted eyes and buck teeth." He added, "You’d think FreshDirect would know better. That mailer is pretty awful. It’s like a return to the 1950s." 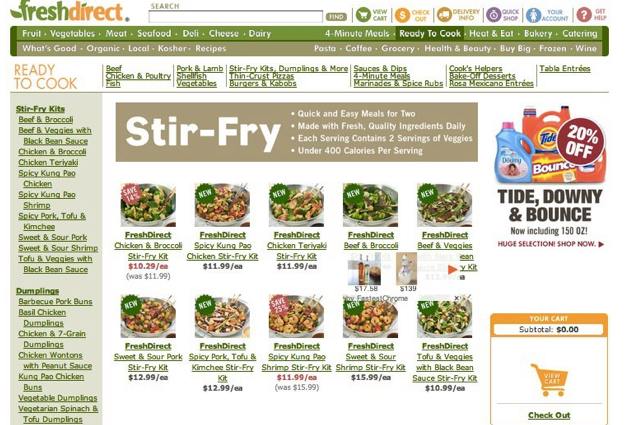 Today, Yang posted on Facebook an image of FreshDirect's current Stir Fry Kits and Dumplings page, noting, "In response to my WSJ Online column, FreshDirect has apparently erased the chopsuey/chopstick font from their website. Kudos, FD."

#chop suey lettering
#chopsticks lettering
#dumplings
#FreshDirect
#racist font
#stir fry kits
Do you know the scoop? Comment below or Send us a Tip
A new Gothamist is coming! We’ve moved comments over to our beta site. Click here to join the conversation and get a preview of our new website.