Californians love to bray about how their Mexican food surpasses NYC's, no question. Agree to disagree. But now we have some West Coast upstarts who've brought the Cali-style to the East Coast, and one of them, Lucha Lucha, has just expanded to Bushwick.

Two years ago, the restaurant opened up its first location in Bed-Stuy, doing San Diego-style Mexican in a small space on Nostrand Avenue. Like Tex-Mex, SoCal Mexican isn't what you'll find on a trip to Oaxaca or one of Mexico's other states. Instead, it's an amalgam of Mexican and Californian cuisines, which in this case, means lots of french fries.

San Diegan Jay Welch—who heeded the call of co-owners Blair Papagni and Josh Cohen to come run the restaurants—says that rolled tacos (similar to taquitos), carne asada fries and bean-less, french fry-stuffed burritos are the hallmarks of San Diego-style Mexican. But for Welch, it's the sauces that really matter. 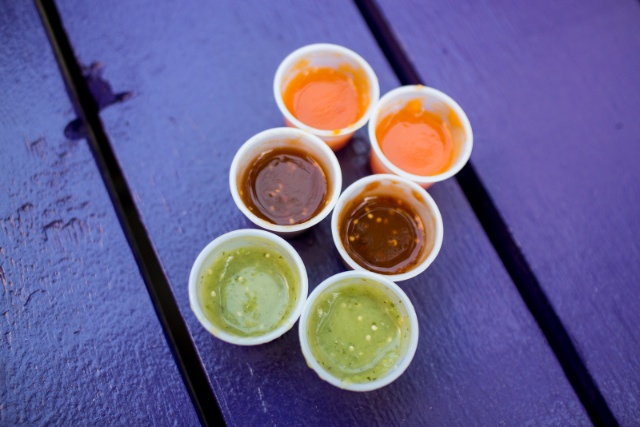 The restaurant turns out three different sauces, like a Salsa Verde that automatically comes inside the California Burrito ($10) along with those french fries, a smoky Chipotle, and an electric orange Habanero Carrot that's not as fiery as its hue would suggest. In California, it's common to alternate bites of burrito with different sauces, Welch says.

The "$15 pound" California burritos have been the big seller since day one, but the more classic burrito application of rice and beans in the Tex-Mex ($9) one has also been a hit. Instead of pintos, the Nachos ($10) employ black beans and epazote in their refried form accompanied by a mix of chorizo and steak and the Carne Asada Fries ($13) are essentially the same but with fries instead of tortilla chips.

There's no liquor license just yet, but when it arrives, so will margaritas on draft and frozen drinks. For now, it's just beers and wines, which are just $4 during happy hour from 3 p.m. to 7 p.m. While the weather holds, take your grub and head out to the back patio to perch on one of the colorful picnic benches.

#bushwick
#carne asada
#lucha lucha
#new restaurant and bar radar
#san diego mexican
#original
Do you know the scoop? Comment below or Send us a Tip