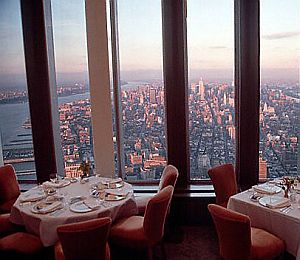 The Port Authority of New York and New Jersey, which is in charge of construction on the new 1 World Trade Center – AKA the Freedom Tower – is now seeking developers to design, build and operate a 34,000-square-foot restaurant on the 100th and 101st floors; whoever wins the bid may also win rights to operate the observation deck planned for the 102nd floor. The Authority is gazing into its crystal construction ball and seeing a Grand Opening in 2013.

Space for the restaurant is being allocated in homage to the pricey and popular Windows on the World restaurant (pictured), formerly located on the 106th and 107th floors of the north tower of the World Trade Center and renowned, of course, for its spectacular views. Over 150 employees and guests of Windows on the World were killed on the morning of September 11th, 2001. In 2006, surviving employees went on to start the cooperative restaurant Colors on Lafayette Street; Windows chef Michael Lomonaco – who dodged death by tarrying at an eyeglass shop on his way to work that morning – went on to open Porter House New York in the Time Warner Center.

Windows on the World was the highest grossing restaurant in America in 2000, but the multimillion dollar question is whether the memories of 9/11 will curb diners’ interest in eating at the top of a financial district skyscraper. Come 2013 – or whenever this thing gets done – will you be calling for reservations?