Tonight, Smorgasburg travels to Manhattan for a nighttime version at Central Park's SummerStage, with 30 of the pop-up market's vendors packing Rumsey Playfield. From 5 p.m. to 9 p.m., stalwart vendors including Mighty Quinns, Ramen Burger and Milk Truck will join a few newbies for an evening takeover that includes an as-yet-unnamed DJ. Fresh dishes come in the form of Hawaiian ceviche (East Coast Poke), seafood toastadas (El Super), butcher shop burgers (Fleisher's) and a few others, plus sweets from Butter & Scotch and their regular beer and wine bar. If all goes well, look for this to be a more permanent arrangement next year.

There are two events kicking off Oktoberfest this weekend, including the Steubenfest, in the historically German section of Yorkville, and Blocktoberfest, a big beer fete by the NYC Brewers Guild. At the first, expect "German beer, brats, sauerkraut, home-made potato salad and many other German delights" plus some German tunes. At the second, lotsa beer, of course, including product from new spots like Flagship Brewery and Grimm Artisanal Ales, and more established folks like Bronx Brewery and KelSo. Admission is $10 and beers run $5; get tickets here. 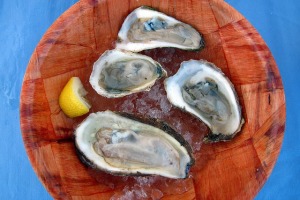 On Sunday, attend Chef Charlie Palmer's third annual Oyster Social at The Patio, the new outdoor lounge at the chef's restaurant Auerole. The three hour fete kicks off at 1 p.m. with oysters and other seafood plus some more seasonal fare; also included in the unlimited eats, bottomless wine, champagne, beer and bloody marys. The shindig benefits Citymeals-on-Wheels, who provide meals for the city's senior citizens. Tickets run $85.

Sunday's pleasant temperatures call for one last frolic outdoors, so spend it in the sweet backyard at Greenpoint's The Diamond. The kicker? Free pancakes, yo! Beginning at 10 a.m. the bar is flipping up flap jacks to pair with pints of Southern Tier Pumpking, one of the brewery's seasonal gourd offerings. This is the fourth year they're giving out gratis breakfast and they warn folks to arrive early to not miss out on the grub.

#oktoberfest
#weekend roundup
#original
Do you know the scoop? Comment below or Send us a Tip