Our latest installment of Quick Bites brings us to SoHo for a popular Mumbai street food.

THE VIBE
The team behind Frankie Goes to Bollywood, led by chef and owner Yasir Chaudhry,
have their marketing/branding/PR game locked down tight. Opening to plentiful preview hype last week on the western edge of SoHo, with a menu that right now consists entirely of Frankies, a popular Mumbai street food that are like flatbread wraps, FGTB is one of the most themed-out hole in the wall spots I think I've ever seen.

Side dishes, desserts, and freshly-made drinks are all still to come, but the "swag" is already piled high and ready to be sold, including caps, travel mugs, and a half dozen different brightly-colored branded t-shirts with 1980s-referencing food slogans like Hungry Like A Wolf, Ain't Nobody Feed Me Better, and the lengthy All I Ever Wanted, All I Ever Needed, Is Here In My Mouth. Cheeky verbiage is also plastered on the garbage cans, and videos from Holi Festivals project continuously onto the brick wall. The soundtrack is new wave radio hits. 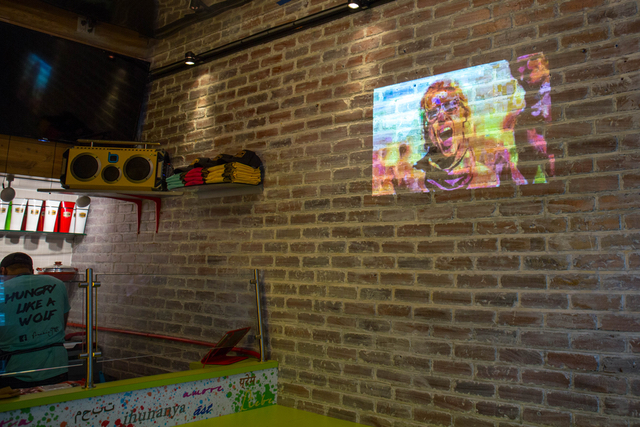 Customer comfort is less well thought out. There are five low stools pressed up against the wall, but given the narrow counter's hard right angle really only two or three people can sit at one time. Better to take your Frankies outside to the bench next door, or walk a block up Sixth Avenue to Father Fagan Park. No plates or utensils are available, nor is tap water (you have to buy a plastic bottle).

THE BITES
Chaudhry grew up in New York City in the '80s, and spent 25 years working front of the house for the likes of Andrew Caramellini, Alfred Portale, and, at Paowalla, Floyd Cardoz. Given the emphasis on branding and merchandise at Frankie Goes to Bollywood—the clothing menu is longer than the food menu at this point—dreams of expansion are clearly in the works. Unfortunately, all of that seems to have taken precedence over the food itself.

I ate six different Frankies over the last few days and the first thing I want to say is that the flatbread wrap is gluten free, which is good news for those afflicted with celiac disease but much less exciting for everyone else. Think of all the excellent Indian bread you've had in your life. This isn't that. Chaudhry uses a blend of lentil, chickpea, and rice flours, and there's an unfortunate grittiness in the end result. It doesn't help matters that these are griddled past the burning point, and they don't "char" well. Basically, there's no joy on the outside.

You can find a couple of good fillings though. The Positively Palak, with its creamed spinach curry and chewy pickled mango, has complexity, comfort, and packs an excellent kick. It's impossible to eat with any dignity—the thing flops all over the place—but it is pretty delicious. The Outrageous Okra is also worth a try, the dried apricots bringing tang to the earthy vegetable. The other vegan Frankie, Awesome Aloo, made with a lifeless cauliflower-potato hash, was more of a slog.

All of the meat Frankies were bad. In the Rad Rogan the braised lamb was so dry it ate like a punishment. The seemingly spiceless tandoor chicken in the Totally Tikka was almost as unpleasant. And while the Slammin Saag benefits from a healthy dollop of Chaudhry's spinach curry, the large chunks of beef were, on too many occasions for such a small sandwich, unswallowable and tough.

THE VERDICT
An unfortunate trend of 2018 seems to be marketing-driven concept restaurants with little love given to the actual food. These are fun for publicists, much less so for guests. Frankie Goes to Bollywood caught the eye of every passerby both times I ate there, so if Chaudhry can figure out to make people happy once they're inside, there might still be some hope.

Frankie Goes to Bollywood is located at 204 Spring Street, just east of Sixth Avenue, and is open Monday through Saturday from 11 a.m. to 9 p.m. Closed Sundays. (646-869-1600; frankiegoestobollywood.com)

#frankie goes to bollywood
#quick bites
#soho
#original
Do you know the scoop? Comment below or Send us a Tip