The face of the exclusive Italian restaurant Rao's, Frank Pellegrino Sr., passed away on Tuesday at age 72 at Mount Sinai Hospital. The cause was lung cancer.

Pellegrino was co-owner of the East Harlem eatery . According the NY Times' obituary, he was "a struggling singer playing nightclubs and cruise ships in 1972 when his aunt, whose husband’s father had founded Rao’s, on East 114th Street, in 1896, enlisted him to help out because business was booming. 'I came for two weeks and stayed 44 years,' he told Vanity Fair last year."

Rao's regular, former NYPD detective Bo Dietl, told Page Six, “Rao’s may be over 100 years old, but the person who made Rao’s what it is was Frankie. It is a place that is so unique because of him and it is not going to be the same without him. He was big-hearted and generous and always took care of people. What a shining star and a big personality, I will miss singing along with him every Thursday night." 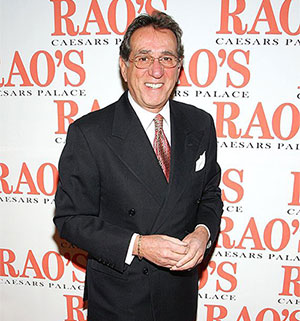 The restaurant's small size—plus the fact that it's only open for dinner Monday through Friday—meant diners clamor for a chance to eat there (the Zagat review says, "It practically 'takes an act of Congress'" to get a seat). Eater explains, "There are no reservations, just table assignments, designated decades ago by Pellegrino Sr. and his Aunt Anna."

A statement from Rao's reads:

Rao's iconic co-owner, Frank Pellegrino Sr. passed away on January 31st in the presence of his family and loved ones. He was 72 years old. While the entire Rao's family mourns his loss, they also celebrate his life, and know he'd be adamant that the show must go on.

Presiding over a hallowed New York establishment elegantly entrenched in a bygone era of Packards and Parodis, Frank Pellegrino was an impeccable curator of the City’s gritty, glorious past. It was under Pellegrino’s inspired stewardship that Rao’s became the City’s most coveted dining destination, a place where the A-list and the hoi polloi found common cause in food, song and unbridled revelry.

Rao’s counter-intuitive quirks were pure Pellegrino, the place is perpetually festooned in Christmas decorations and is closed on weekends. The interminable waiting list, the celebrity sightings and mouth-watering fare were an experience that spawned faithful satellite locations in Las Vegas and Los Angeles as well as a thriving food company. Pellegrino was the last of the great hosts (here we speak of Toots Schor and Elaine Kaufman), his exquisite style and effortless elan brought the room to life, his voice, especially when leading the raucous throngs through a chorus of “My Girl”, could bring down the house.

The only aspect of Frank Pellegrino that exceeded his stentorian voice was his heart; he worked tirelessly on behalf of Mount Carmel Holy Rosary School and The Ronald McDonald House, and donated countless tables that were auctioned off for staggering sums that benefitted myriad causes. In lieu of flowers, the family suggests a donation to either Mount Carmel Holy Rosary School or The Ronald McDonald House.

Pellegrino, whose survivors include his wife, Josephine; daughter, Angela Pellegrino; and son, Frank Pellegrino Jr., who runs the Rao's locations in Los Angeles and Las Vegas, was also an actor. He famously appeared in the Goodfellas prison cooking scene and as an FBI agent on The Sopranos:

Rao's has been linked to the mafia, and a mobster once fatally shot another diner there who had complained about a singer.

Details about a memorial are still being planned.