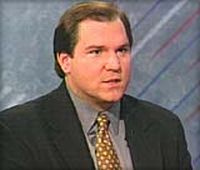 NY Times restaurant critic Frank Bruni, he of the fast-food cross-country road trip (he swears by Chick-Fil-A, which has but one local outpost in NYU’s food court), has revealed more of his inner workings in a recent interview with website Refinery 29. For starters, Bruni eschews a big breakfast because of all his professional eating burdens throughout the day. On most mornings he strolls over to Levain Bakery and picks up a baguette with butter and raspberry jam. Once home, Bruni goes feral: “I demolish it in four or five bites, squeezing it so tight the jam drips from the edges, and I sometimes have to change my shirt afterward because of the jam stains.”

Fingernails caked with jam, crumbs littering his hair, Bruni presumably sits down to withhold or bestow stars upon the latest restaurant quivering in his crosshairs. But first we picture him lighting a candelabra of Illume Balsam and Cedar candles; Bruni says he loves the scent of Christmas and has stockpiled them because of a professed fear that “the things I fall in love with will disappear when I least expect it.” (Maybe that's why he eats so fast?) The right medieval mood set, Bruni then blasts the Scottish band Travis so loudly he’s “shocked [his] neighbors haven't taken out a restraining order against [him] and it.”

Other secrets revealed? Bruni’s a Patriots fan and he thinks this election year is more interesting than anything on Broadway,which means he soooo hasn't seen Legally Blonde. Also, he lives near 74th and Amsterdam, a bit of information his arch-enemy, restaurateur Jeffrey Chodorow, will surely use to his diabolical advantage. With so many burning candles around, wouldn’t it be all too easy for a sudden blaze to accidentally consume Bruni’s lair?