Rumor has it soda cocktails are all the rage this summer with Demi Monde mixing up their own versions with their house-made "custom soda carbonation system." That's all well and good when you're in the mood to feel fancy but summer is also about kicking back and keeping it casual, man, and you don't need no fancy carbonation system to add some bubbly to your booze. If you've ever mixed soda into your Carlo Rossi you know what we're talking about. So, let's look at some grown-up versions of the Soda Rossi, even if Mayor Bloomberg might frown upon it. 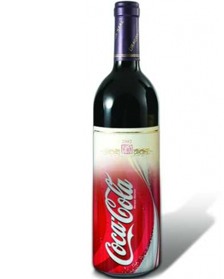 KALIMOTXO—or Calimocho as we knew it in college—combines red wine, cola and ice for a sweet yet tangy flavor. A bold Shiraz or Cab would go well with a plain variety cola, but combine more delicate Merlots with your favorite fizzy flavors for something a little different. Even though it sounds strange, we think diet cola tastes the best and has the added value of being significantly less caloric. You win this round, Bloomie.

The Brits really know how to tie one on so it makes perfect sense that the SHANDY originated in the UK. The traditional application involves lager and lemon-lime flavored soda, but this drink can come together any way your imagination and taste buds can think of. We've tried Blue Moon and Sprite, pale ales with ginger ale, and even porters with root beer. You could also try the Snakebite by substituting hard cider (it's like boozy soda anyway) for the pop.

And finally, channel your inner 57-year-old woman with a refreshing WINE SPRITZERS [ed. note: I would like to point out that wine spritzers aren't just for your quirky Aunt Sheila anymore. It is PERFECTLY ACCEPTABLE to order these at bars, no matter what age. — Carlson]. The basic recipe calls for crisp white wine combined with citrus soda or seltzer, if you're keeping it simple. But jazzing it up with your favorite frozen fruit adds extra flavor and looks pretty to boot (we recommend raspberries and lemons). Off-beat soda flavors—strawberry, peach, grapefruit—are also fun to try, as are adding fruit juices, bitters, simple syrups, other spirits and fresh herbs like mint and basil. Don't be afraid to try something new, it's liberating, isn't it?

Speaking of bitters, FERNET BRANCA is a type of bitter (which contains 45% alcohol by volume) that pairs up well with Coke, served either at room temperature or on the rocks. But be warned: the flavor has been described as "black licorice-flavored Listerine" and "medicinal," so it may be an acquired taste.

#booze
#calimocho
#cocktails
#kalimotxo
#shandy
#soda
#soda ban
#spritzer
Do you know the scoop? Comment below or Send us a Tip