The face of the famous Four Seasons restaurant has been forced to resign following unspecified allegations of misconduct. Julian Niccolini, who in 2016 pleaded guilty to misdemeanor assault after being accused of sexually assaulting a female patron at the restaurant's bar, was dismissed from the somewhat-recently reopened restaurant yesterday. The Four Seasons had this to say in a statement:

"It had been hoped that Mr. Niccolini would fulfill the agreement he made in 2016 to seek help and change his behavior during the Four Seasons’ two-year hiatus while the new restaurant was under construction. In the short period of time since the restaurant had reopened, it had become clear that he had not honored that commitment.

“Creating a warm and respectful environment for staff and patrons alike is central to the exceptional fine dining experience for which the Four Seasons has come to be known."

Niccolini, who became a co-owner of the Four Seasons in the early '70s, was infamous for his flirtatious behavior in the restaurant, earning him the sobriquet 'Naughty Niccolini.' Eater called him "notoriously handsy." The 65-year-old restaurateur was the subject of a number of sexual harassment allegations, resulting in at least two lawsuits from female employees being settled out of court. In a 1991 lawsuit, a female server accused Niccolini of rubbing up against her and calling her vulgar, degrading names. Four years ago, a former assistant manager accused the restaurant of firing her without cause after she returned from maternity leave.

In the 2015-2016 criminal case, Niccolini was accused of assaulting a 28-year-old woman whom he tried to kiss in the bar of the Four Seasons, "touching her legs and buttocks and pulling her toward him...then reached through an opening in the back of her dress and tugged on her bra until it ripped, touched her breasts, yanked up her dress and tried to pull down her stockings," according to a criminal complaint. Niccolini pleaded down from a felony assault charge to a misdemeanor, avoiding prison time with a "conditional discharge." 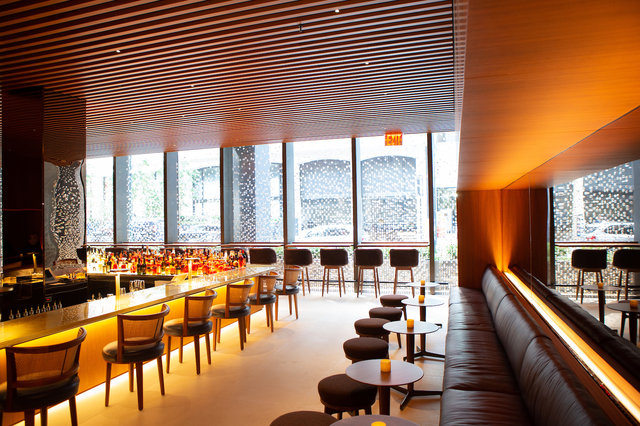 The Four Seasons was forced to relocate across Park Avenue after its lease in the Seagram Building ran out in the summer of 2016, and the restaurant reopened four months ago with Niccolini and co-owner Alex von Bidder back at the helm.

In reviewing the new location for the Times earlier this month, Pete Wells demoted the restaurant down to one star, writing positively of the food but deciding that "restaurants, even grand ones like the Four Seasons, are intimate places; eating is an act that requires trust and a sense of safety. We want to get up from the table feeling restored on all fronts except the financial one. Mr. Niccolini’s actions have done serious damage to his power to provide that feeling, even as he and Mr. von Bidder have made the restaurant better than it has been in years."

A Four Seasons spokesperson denied that the NY Times review was a factor in Niccolini's resignation. Sources tell the NY Post that von Bidder was “the driver” behind Niccolini’s ouster. Neither von Bidder or Niccolini have commented on his removal.

Niccolini's termination is only the latest example of sexual misconduct involving a powerful man in the restaurant industry, which has long been plagued by this sort of abuse. As of May, celebrity chef Mario Batali was under investigation by the NYPD for alleged sexual assault, and disgraced restaurateur Ken Friedman (The Spotted Pig) has been under investigation by the NY Attorney General's office for allegedly fostering a workplace culture of sexual harassment and discrimination.

#four seasons
#julian niccolini
#restaurant industry
#sexual harassment
#sexual misconduct
Do you know the scoop? Comment below or Send us a Tip