Though the utilitarian greasy spoon diner can seem like an endangered species in parts of NYC, there continues to be an upswell of more refined diner fare—a trend that dates as far back as, well, Diner. The latest elevated diner experience is helmed by Chef Samuel Yoo (formerly of Momofuku Ko), and opened earlier this week in the Two Bridges area between Chinatown and the Lower East Side.

Tucked under the whirring Manhattan Bridge, Yoo's outpost features an array of nourishing, bright spins on classic diner fare, such as Matzo ball soup and "two eggs, how you want 'em." Inside you'll find dark-green stools surrounding a counter, an old-timey clock hawking chicken dinners, and sunlight streaming through floral lace curtains. It's the kind of place you can easily—and joyously—hole up in for hours with a bottomless mug of coffee and a bite to eat.

Yoo grew up going to diners around Queens. At the restaurant, which was two years in the making, he wanted to capture their singular spirit in a present-day context, along with his own influences and that of the Golden Diner's surrounding neighborhoods of Chinatown and the Lower East Side.

"I'm sure you've read that all the diners are closing shop now," Yoo tells Gothamist. "I'm just trying to change that... that is very near and dear to my heart and [I want to] do it in a way that's more interesting." 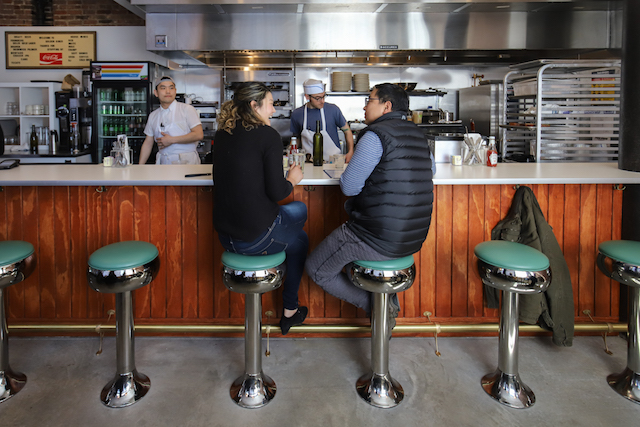 That approach means more vegetables, and paring down the typical laminated tome that is a diner menu—this is a two-sided card, and that's it. Golden Diner's menu instead goes with a smattering of options and does them extraordinarily well, riffing on comfort staples like club sandwiches—Yoo's rendition is done up with chicken, a fresh red cabbage slaw and bulldog sauce, and topped with a generous helping of perfectly crispy, salt-laden fries ($12). And a spinach salad includes sesame pecans, bacon, eggs, and mushroom, drizzled with a Japanese mustard vinaigrette ($12). Grub Street has photos of items not on the current menu, which seem promising—they include a vegetarian pastrami-spiced-portobello quesadillas, and a bacon egg and cheese. Yoo also told us he's working on Korean fried chicken wings.

One of the menu's stars is the Millennial generation's oft-maligned avocado toast ($10). Yoo says he drew from Southeast Asian flavors for his version of the dish, which imbues a Kaffir lime, galangal, and lemongrass boil onto the toast, then flecked with scallions, Thai basil, and turmeric. It's nothing short of addictive. Sadly, when we dropped by they were out of the green tea coffee cakes.

Cross sectional view of our green tea coffee cake- we use a combo of matcha and houjicha tea for that sexy swirl 🖤 and maximum flavor. Very nearly ready to feed you, stay tuned. . . . #greenteacake #pastryporn #cantwaittofeedyou #sneakpeek #goldendinerny #teamgolden

Golden Diner is located at 123 Madison Street. It's currently in its soft launch phase, open for breakfast and lunch, until 3 p.m. Service will eventually include dinner.

#diner
#golden diner
#samuel yoo
#Two Bridges
#original
Do you know the scoop? Comment below or Send us a Tip