Stolen tips, no overtime, no minimum wage: these are some of the complaints angry restaurant workers aired at a rally today against their former employer Grand Sichuan. A small crowd gathered with the ex-employees at midday in the bitter cold outside their old workplace at 19-23 St Marks Place, the East Village outpost of the chain.

"I started working here as a delivery guy in 2007. For a long time, the boss didn't pay me minimum wage or overtime. I organized with my coworkers to file a lawsuit against the boss. We organized pickets. We just got a little paid back after a long time of organizing," Chang Hui said, his words translated from Mandarin.

Chang Hui said his boss retaliated against workers who tried to organize. "On December 5th, the boss fired me," he explained. "The boss lied and said I beat up other coworkers. But these workers were on the side of the boss... The police came and looked at the surveillance footage, but the boss fired me anyway."

When workers tried to make demands of management, there would always be some form of retribution, said Chang Hui. This included delivery drivers being given smaller orders and missing out on larger tips.

Xiao Fang, a Brooklyn woman in her 30s, had a similar story to tell. Starting out at Grand Sichuan in 2008, she said she didn't make above minimum wage or overtime in any of the years she spent there. Fang said that when she stood up against another employee taking money from her tips back in May 2014, her coworker assaulted her while management stood by and watched.

"For months, I couldn't work," Fang told us through a translator. "In 2015, January, a few days ago, I returned to try and ask them for my job back. The boss said to me in a very angry voice 'Why are you here? You sue the restaurant and you sue the boss.' And he fired me right there. I demand the restaurant give me my wage and overtime wage, we want reinstatement for all the workers retaliated against."

The restaurant—which received a B rating in October last year after violating three sanitary codes including two related to flies and vermin—is one of seven owned across New York City and New Jersey by Xiao Tu Zhang and Wen Yan Gao. When we went into the establishment to try and talk to management, we were informed that no one was available to speak to the media. 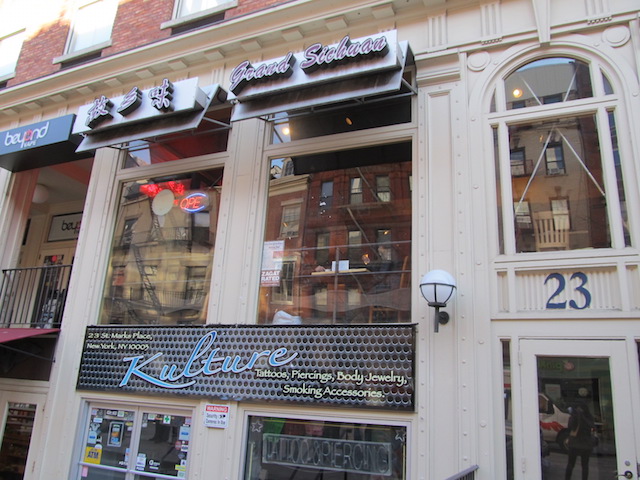 "The owner thinks he has a lot of money and can get away with it, you know?" said Sarah Ahn, one of the event organizers.

As Chang Hui mentioned, it's not the first time Grand Sichuan has come under legal fire from disgruntled employees; in 2012 the Chinese Staff & Workers Association filed a charge against the East Village location for firing two workers and issuing a final warning to another. The case was tried in 2013 and the company was found to have "engaged in certain unfair labor practices" and forced to backpay wages. Grand Sichuan was warned at the time to cease and desist from discriminating against its employees for trying to improve their conditions.

Chang Hui said things went back to normal after the case. "They paid us back a little bit, and they resolved it," he said. "But after that, they retaliated against us. The boss, because of that case, targeted us particularly." 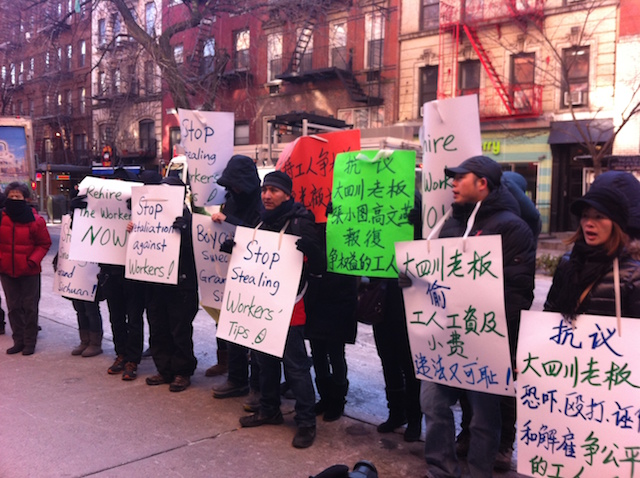 Determined to make their voices heard, the group pushed through the freezing temperatures, some without gloves, and continued to chant outside the restaurant after Fang and Chang Hui spoke.

Grand Sichuan enjoys largely positive reviews for their dishes on Yelp, but one reviewer back in 2008 questioned why the workers seemed down: "The staff isn't friendly; they seem to be unhappy for some reason." Not receiving minimum wage and overtime may have something to do with that.

#grand sichuan
#protests
#restaurant workers
#restaurants
#original
Do you know the scoop? Comment below or Send us a Tip
A new Gothamist is coming! We’ve moved comments over to our beta site. Click here to join the conversation and get a preview of our new website.