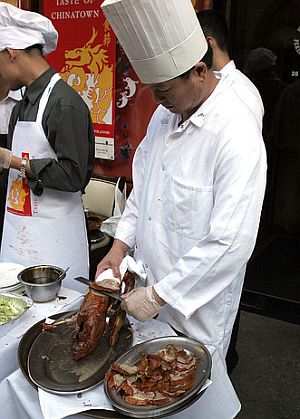 You know how Hispanic cooks have been replacing Italians in a lot of pizza joints? The same fate could be in store for the city’s Chinese restaurants, as the booming Chinese economy now gives chefs little incentive to take work in a declining America. Many area restaurant owners
are distressed by the trend and blame it on the fact that executive chefs’ salaries in China are matching or even surpassing the U.S. pay grade.

Salaries for chefs in China have risen 30% in the past five years, with a lower cost of living. And it’s not just the feeble dollar that’s at fault, but post-9/11 immigration restrictions as well. According to Michael Tong, owner of the Shun Lee restaurants in Manhattan, it can take as long as a decade for chefs to get a green card in some cases.

According to the Daily News, the shortage also speaks to the familiar dynamics of immigration, as the younger generation that grew up in their parents’ restaurants (or stores) pursue careers in law and medicine. Tim Zagat also points out that until the 80s Chinese food was still the dominant Asian food option in America; now there’s competition from Thai, Malaysian and Vietnamese cuisines.

Chinese restaurateurs are starting to feel the pinch and Peter Xie, manager of the Peking Hunan Park on Park Avenue, seems resigned to the inevitable: “Maybe we should start to train unskilled new immigrants.” General Tso’s Chicken Quesadilla, anyone?