Food Stamp Users Have More Than Doubled Under Bloomberg

Today the city proudly pointed out that when it comes to population numbers we're doing really, really well. But if you look at other stats, things don't look nearly as peachy. The middle class is screwed, the homeless population is booming, and let's not even get started on food stamps. Actually, let's. Because those numbers aren't any better.

Today the Independent Budget Office of New York's blog has a incredibly depressing series of graphs looking at city data on income support in the city under Mayor Bloomberg. And oof: "Over the last decade, the number of city residents receiving food stamps has more than doubled, while public assistance recipients have decreased and the number of blind and disabled New Yorkers receiving Supplemental Security Income benefits has remained flat."

Last year NYC residents received $3.4 billion in food stamp benefits as well as $2.9 billion in supplemental security income and $1.4 billion in public assistance. Let's compare that to 2002, shall we? 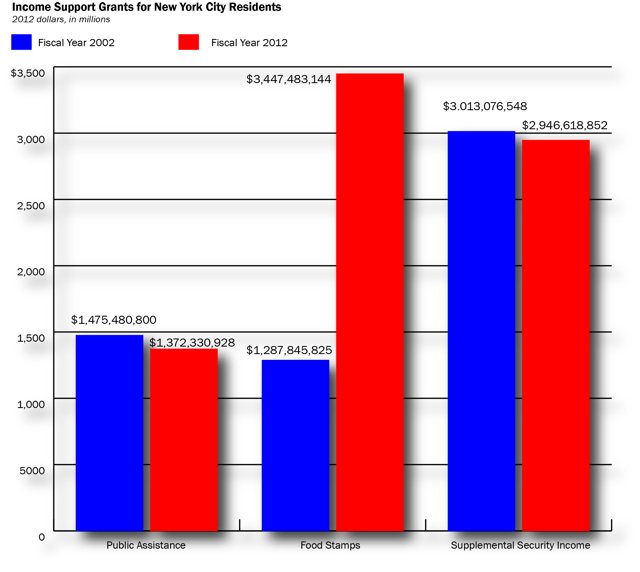 And before anyone starts blaming this on penny-pinching millionaires let's remember that in order to be eligible for food stamps in New York you must make less than $14,532 a year (or be in a family of four making less than $29,976 a year). Now, who wants to persuade Mayor Bloomberg to pull a Booker and take the SNAP challenge?