This post is a sponsored collaboration between Blue Apron and Gothamist staff.

Did you know there’s a delivery service designed to teach you how to cook restaurant-quality meals at home? Some of us at Gothamist tried it out for a week to see what it was all about. Easy, convenient, tasty, worth the money? You should probably read on—or at least look at photos of melty cheese—to find out!

Blue Apron is also offering an exclusive deal for Gothamist readers! Click through this link—and this link only!—to sign up with a discount and get cooking. 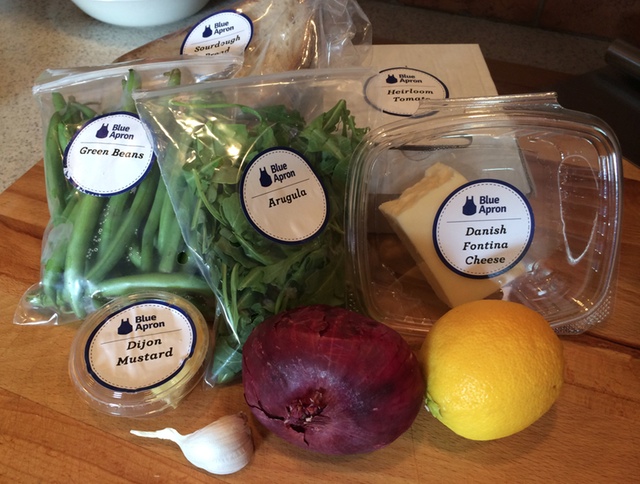 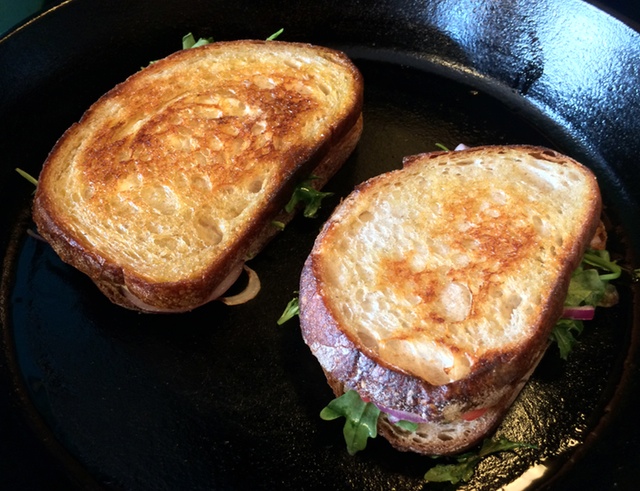 The best part of this recipe is that it's most definitely greater than the sum of its parts. Sourdough, tomotoes, onion, and greens are something you've had a million times before, but put them all together with some imported fontina and it really turns into something else. I suspect the heirloom tomatoes (which I've somehow never had?) are what did it. 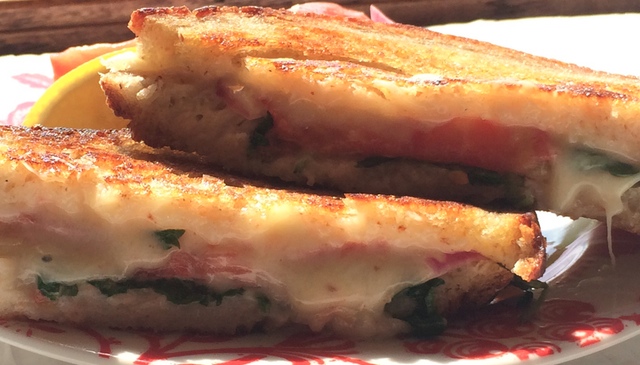 Even cooking this a day after its arrival, the pre-sliced bread wasn't stale. Fontina makes for a gratuitously melty cheese (it's a common complement to sharper cheeses in mac) and a really nice touch was the suggestion to fry in olive oil rather than butter—the toasty crust corners ended up tasting exactly like croutons. This recipe included a dijon green bean salad which was delicious, but I opted for another cheese photo instead. —Monica Schmelzer. Get the recipe! 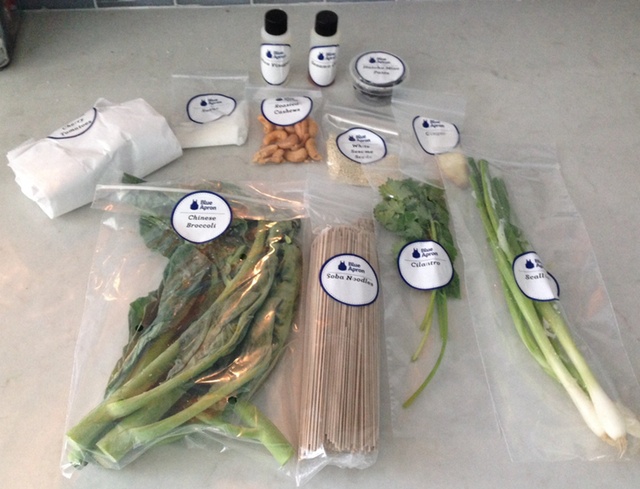 After washing and chopping all the vegetables, I rolled up my sleeves to make the miso sauce. Even though I whisked for a while, it took a bit for the miso to dissolve so be patient! Also, you might want to wait to add the rice wine vinegar and add to taste (you might not want to add the whole thing). I boiled water and cooked the vegetables in the same non-stick pot so there would be one less thing to clean. The soba was super easy to cook, as were the vegetables. 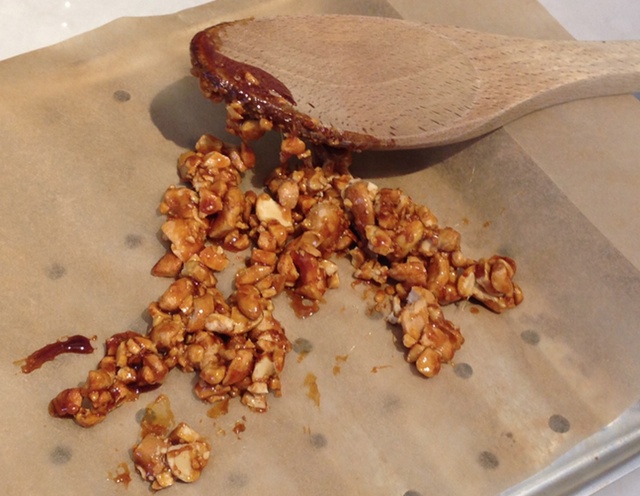 Be careful when you boil the sugar water for the candied cashews—it can burn quickly after it turns medium amber. Also, if you happen to have extra cashews around, toss them in—the more the merrier! 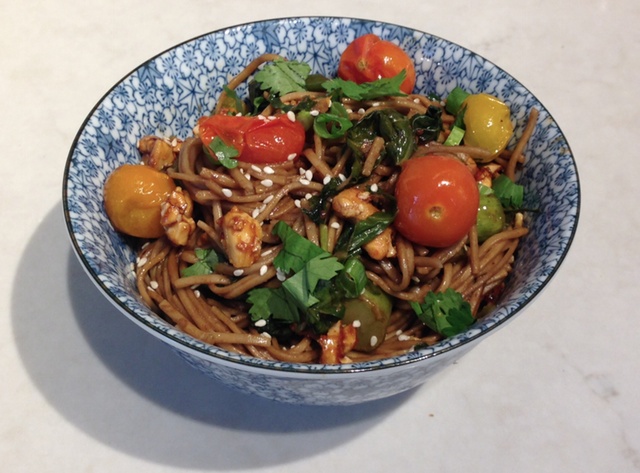 The roasted heirloom tomatoes were really delicious and sweet, a great counterpoint to the earthy saltiness of the noodles. And there's a LOT of soba. I think it's enough for three people! — Jen Chung. Get the recipe! 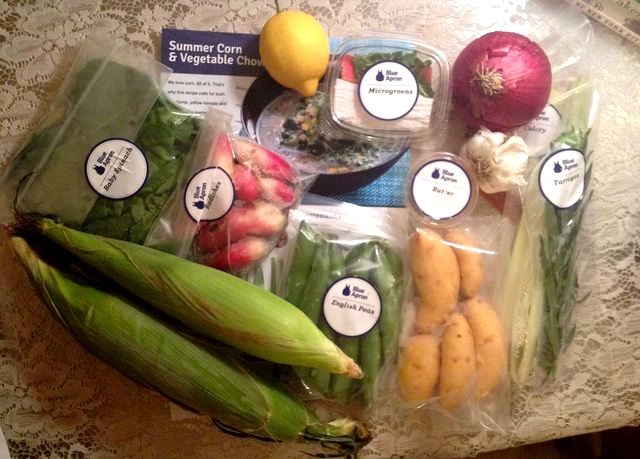 I started my stopwatch and prepped in front of my air conditioner. There was a lot of prep work, but I appreciate that this service also helps people learn to cook, from start to finish, and there's a certain calmness in having a task like this all laid out in front of you. Sometimes shucking corn and mincing garlic can bring a "wash on, wash off" Karate Kid-like focus to your brain. And then there's a bigger sense of accomplishment when you're finished! 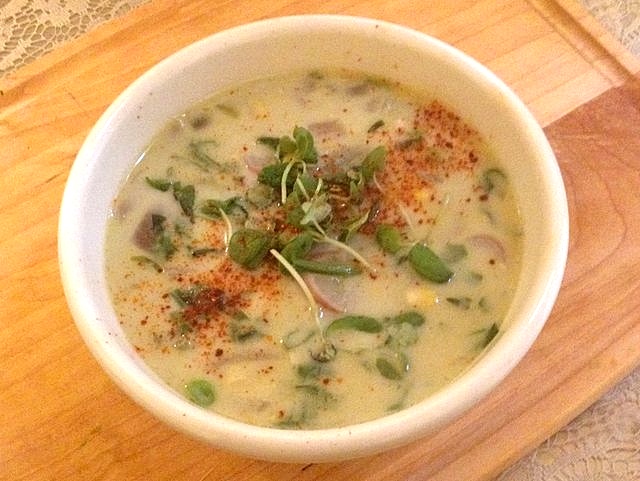 Putting it all together was easier, though the recipe instructions definitely did not allow enough time for the potatoes to be cooked through. A more experienced person would spot this immediately and adjust accordingly, but someone who normally does delivery would end up with mostly raw potatoes. 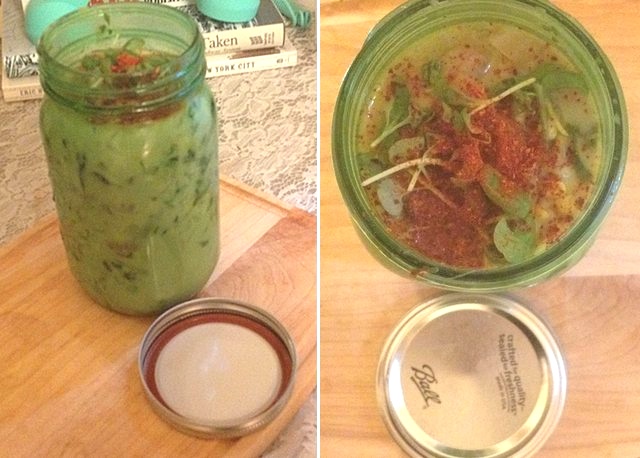 In the end, the chowder was delicious. It made three cups exactly, and I stored it in a mason jar and served it to myself cold the following day (though the recipe calls for hot). I was a little worried it would taste bland, but the flavor was perfect! All in all it took about one hour to make. — Jen Carlson. Get the recipe! 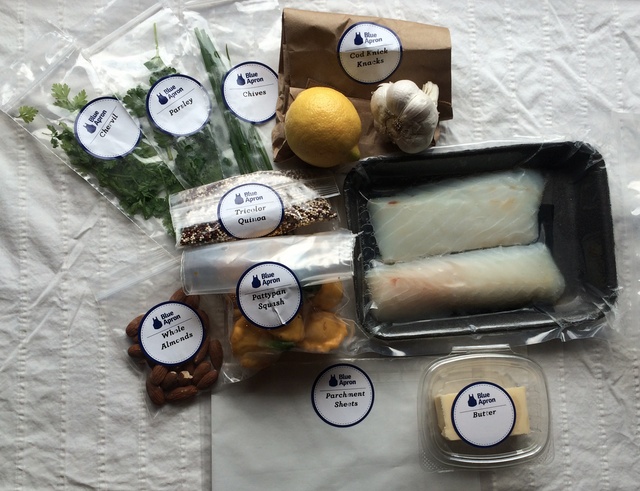 At a glance this was the simplest recipe I had to prepare, but it actually ended up being a complex dish with sophisticated layers of flavor. Part of learning to cook is remembering to somehow add flavor every step of the way, and with garlic (not plain) butter, toasted (not raw) almonds, and a dressed lemon herb salad (not simply garnish) this dish really delivered. 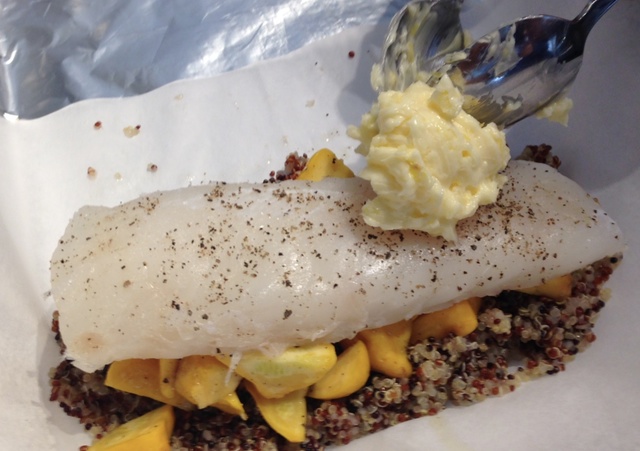 After recently subjecting my roommate to the leftover smell of fried fish for a week, I was hesitant to bake cod on a 90 degree day. Turns out this packet stays in the oven for only 13 minutes, so the only smell throughout the house was garlic butter just browning on the squash. There was definitely a ton of butter in this recipe (twice what you see in the photo) and I'm unclear if I should have used it all, but I did and I'm not sorry. That's what the quinoa was for, I think. 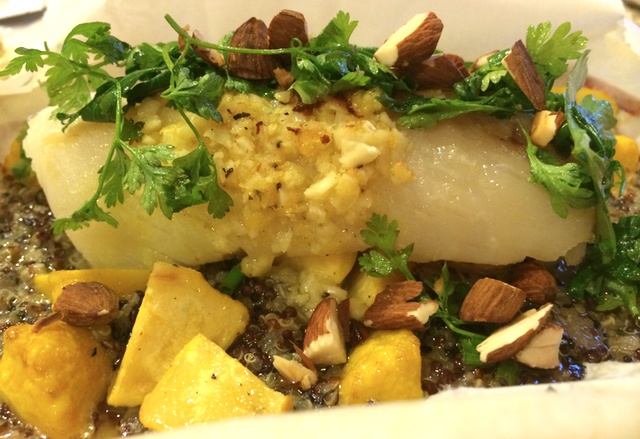 The cod ended up perfectly cooked and the herb salad with almonds is not a garnish I would have thought of on my own. Maybe an accident, but some squash pieces ended up vaguely crunchy and that, paired with the mix of almond-herb-quinoa textures made for a really interesting dish that'll be great for adapting to what's in the kitchen that day. —Monica Schmelzer. Get the recipe! 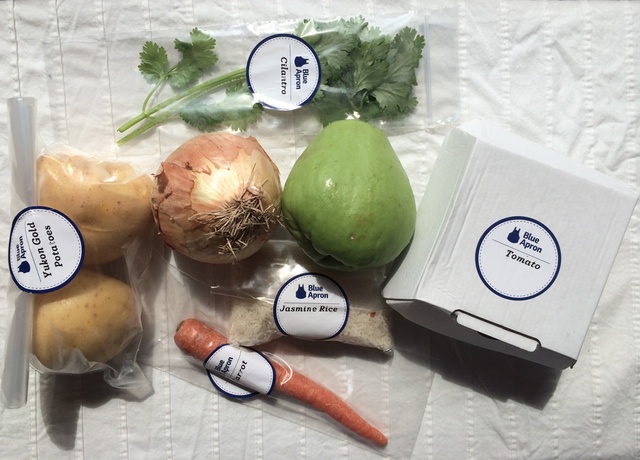 This recipe had me the most excited. Thinking back on it, I'm not sure I've ever had Filipino food, and this interpretation is a great example of that region's cuisine. Tomato, cilantro, beef and chayote suggest a Latin influence at first, but reading further you find Southeast Asian coconut vinegar, soy sauce, and ginger. 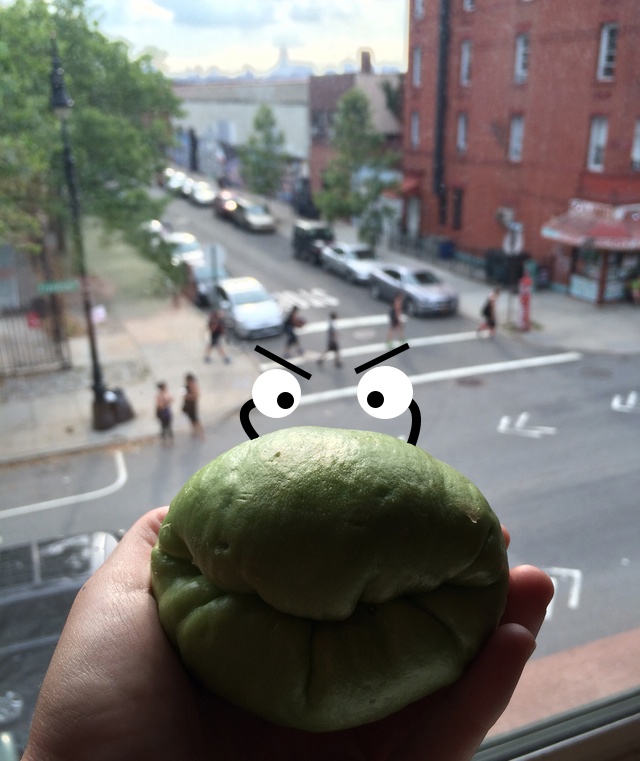 The recipe card describes the chayote squash as looking "grumpy," which is entirely accurate. Once you wipe that grimace off its face though, it's really just a potato-flavored apple. Chayote gets slimy once you peel it so I nearly maimed myself chopping this guy—something else that was noted on the recipe card. I read it, I did not internalize it. 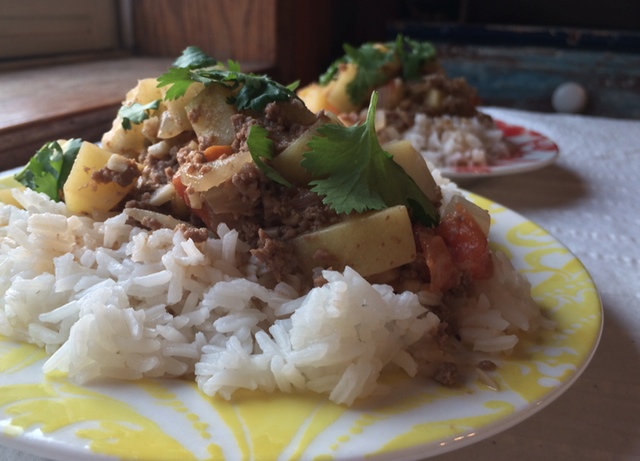 Mixing everything together made a stew, which was a bit watery when prepared as suggested. I reduced the mixture for 20 additional minutes, but I think you could just nix the 1 cup of added water and save some time. The result was really, really tasty and there's nothing better than eating potato carbs on a bed of rice carbs. — Monica Schmelzer. Get the recipe! 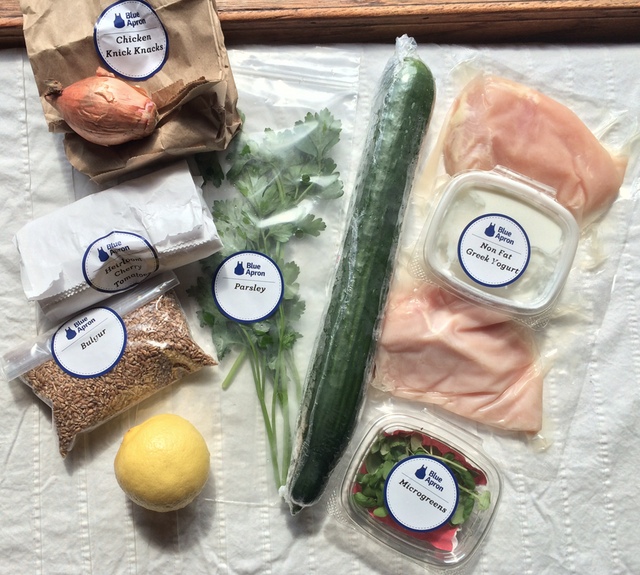 I took out all the ingredients and read over the card, then started to get to work. I spent a fair amount of time prepping (cleaning the vegetables, cutting them), while the cooking time went by quickly. I was thankful for my garlic press, and I opted to use a microplane for the lemon zest in the yogurt sauce (I think, if you're lazy, you could just use some lemon juice for the yogurt sauce). 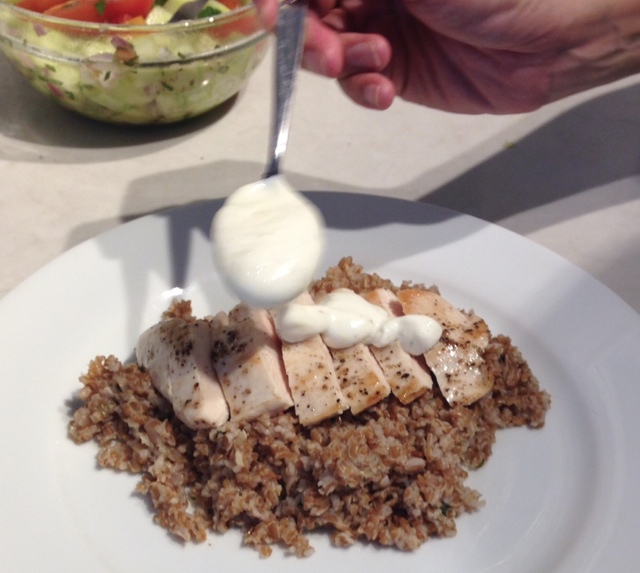 I had never cooked bulgur before and it was really easy! Will definitely make it again in the future. When I sautéed the garlic and shallots, it smelled delicious. I cooked the chicken per directions and it was very juicy. I let it rest a while before slicing it. 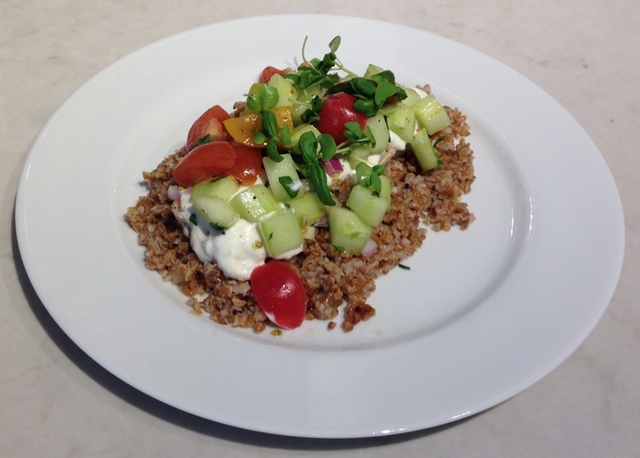 The presentation made the dish look really beautiful. The yogurt sauce gave a great, rich creaminess to the chicken and bulgur and the tomato-cucumber salad was refreshing. The micro greens included with the order were a nice touch that I don't think many home cooks would usually grab! — Jen Chung. Get the recipe!

SO WHAT'S THE VERDICT?

First off, Blue Apron is definitely not Debra's Half-Homemade in 7 Minutes and was never meant to be. This is a service for trying unusual ingredients, getting better at improvisation, and learning foundational techniques for gourmet menus. If we had to boil our thoughts down into a few bullet points, I think they'd look like this:

Ingredients really were quality, from Danish cheese to heirloom tomatoes. There's clearly a lot of thought put into the seasonality of each menu, and Blue Apron prides itself in using farm-fresh items.

Packaging was on point; herbs came packed individually while meats and fish came vacuum sealed for freshness and zero cross-contamination.

Thoughtful menus surprise you with unusual ingredients and unexpected flavor or texture combinations.

Recipes are fast and healthy, meant to be prepared in 40-60 minutes and average 500-700 calories per serving.

You get a perfectly cat-sized box with every single shipment. 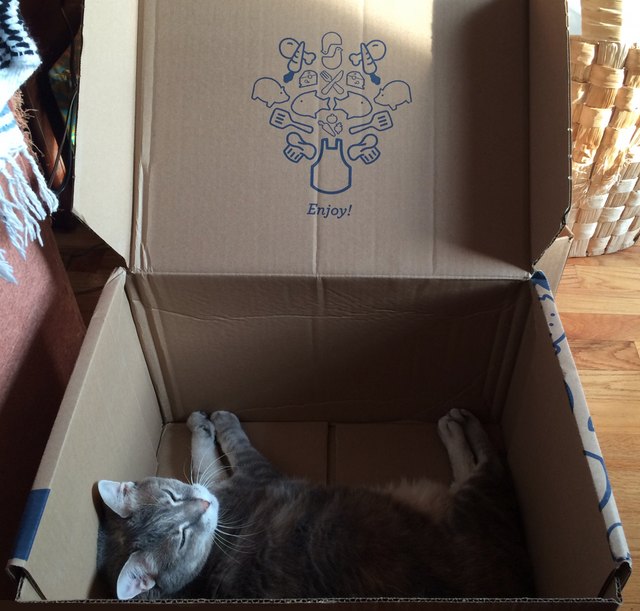 If we've convinced you, maybe you should check out the service for yourself! Click through here to sign up using Blue Apron's exclusive deal for Gothamist readers and get cooking!

#blue apron
#gothamist collaboration
Do you know the scoop? Send us a Tip