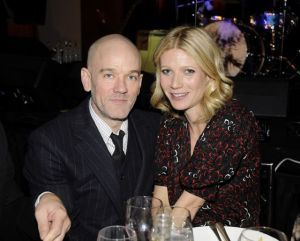 The most memorable part of the event was a live auction hilariously conducted by Susie Essman, who Curb Your Enthusiasm fans know as Jeff's aggressive, outspoken wife. Exact fundraising figures aren't in yet, but Essman berated at least $25,000 out of the crowd. Overall, the event raised approximately $1 million for the Food Bank.

Another high point was Stephen Colbert's speech, which he began by welcoming "ladies, gentlemen... whatever option there may be tonight... hermaphrodites... Michael Stipe... It's not about loving me tonight, it's about loving the Food Bank." Colbert was there to present an award to MTV Network CEO Judy McGrath, and took the opportunity to "apologize for calling Viacom chief Sumner Redstone 'the crypt keeper' on my show... And I'd like to further apologize for bringing that up again right now."