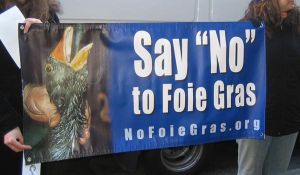 Hudson Valley Foie Gras, the nation's largest producer, is used to fending off lawsuits brought by animal rights activists, but yesterday they won a bit of a reprieve. A New York State appeals court dismissed the majority of a case brought by the U.S. Humane Society, which was challenging an Empire State Development Corporation grant that Hudson Valley Foie Gras received in 2006. The court held that most of the plaintiffs lacked standing to bring the suit.

But there are still several related lawsuits pending, including one alleging that foie gras is "an adulterated and diseased food that should be removed from the marketplace." And earlier this summer the company found itself in the crosshairs of city councilman Tony Avella, who is urging state lawmakers to ban the force feeding of ducks to produce foie gras. According to David Lenefsky, attorney for Hudson Valley Foie Gras, these lawsuits are designed "to put my client out of business." So far, at least, they don't seem to be working.