Flying Saucers (not) Over (in) Queens 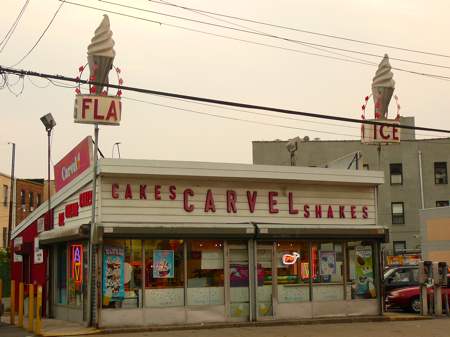 It was reported last week that the 71 year-old Hartsdale, Westchester Carvel -- the very first outpost of the ice cream shop -- will likely be demolished at the end of next summer to make room for businesses that presumably make more money. Yes, the 68% milkfat solid, sidereal softy known as Cookie Puss is crying tiny crunchy tears as we speak; Flying Saucers are slowing down for their final approach. While the building’s current location is the site of the original Carvel store, the fact that it has been renovated over the years to look more retro apparently complicates bids for historic preservation. Tom Carvel, the chain’s gravelly voiced founder who also used to narrate its television commercials (vintage WPIX, anyone?) once lived with his wife Agnes in quarters behind the shop.

A few Carvel locations in the outer boroughs still bear the nostalgic hallmarks of commercial architecture that once helped brand the chain -- the lurching glass-fronted building, pink and white color scheme, giant soft serve cones pivoted above the restaurant like satellites ready for launch. “We’ve been here for at least 45 years,” said a woman behind the counter of the Ridgewood, Queens Carvel location pictured here, though nobody at the store, located at 56-12 Metropolitan Avenue, could say for sure how long it’s really been. The place has that "frozen in time" kind of vibe. Close inspection of the restaurant reveals that its exterior is actually red painted wood, something of an anomaly this day and age when chain restaurants are unloaded in huge pieces from trailers, or practically built from kits. Over at Forgotten New York, Kevin Walsh points to another old Carvel in Wakefield, Bronx.

In particular, the outer boroughs are littered with the ruins of old chain restaurants and takeout shops. A handful of Sizzler steakhouses remain in Queens and the Bronx. All New York locations of nickel hamburger chain White Towers, one-time fierce competitor of White Castle, whose waitresses donned bright starched nurse’s uniforms and caps to project an aura of food safety, have all been closed since the 1970’s. There are rumors that a few old White Towers buildings still exist in the South Bronx, likely repurposed a few generations over by other businesses since the 1970’s, but with their telltale towers intact, ghosts of the restaurant world.