Fly Kimchi to the Moon: Momofuku's Chang Spaces Out 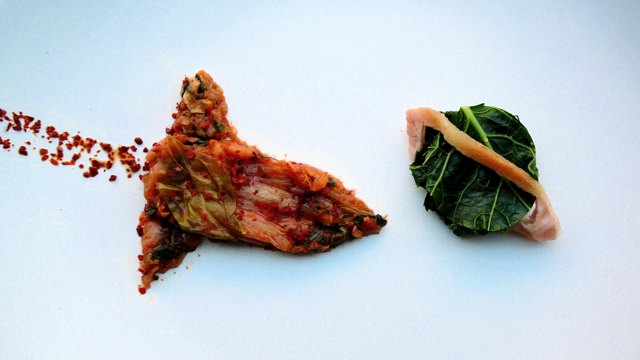 Esquire has just released a far-out video showing Momofuku chef Dave Chang and crew sitting for one hour inside a translucent ten-foot square cube. The resulting portrait, made by Chicago-based artist Lincoln Schatz, is part of an ongoing series commissioned to celebrate both Esquire’s 75th anniversary and “the most influential people of the coming decades.” Through a collage of camera feeds and permuted edits, the video installation portrait never depicts the same image sequence twice.

The result is trippy, like the lava lamp-ish opening credits of a Bond film, but with the Momofuku cooks floating past the screen and showing off their tattoos instead of naked ladies in silhouette doing somersaults off playing cards. A careful viewing of the “Momofuku portrait” makes clear what is really happening here: Dave Chang is preparing to open his next restaurant in outer space, and this video depicts the cooks’ zero gravity training.

Consider the facts: Ramen inventor Momofuku Ando, the real namesake of Chang’s restaurant (don’t believe that “lucky peach” stuff), first sent his noodles into outer space in 2005; Momofuku Noodle Bar is known for its ramen. Last month, a specially researched payload of kimchi made by the Korea Food Research Institute was launched into space with a South Korean astronaut on a Soyuz rocket; Momofuku Ssäm Bar is known for its kimchi variations. And just earlier this week, Sapporo announced it was going to start brewing beer with barley that was grown on the International Space Station. In Schatz’s video for Esquire, Chang and his cooks are clearly shown to be drinking Pabst. So all together, that’s kimchi, ramen, and beer in space: Everything is connected.

Calls to NASA have not been returned. For those ready to give up trying to score a reservation at Momofuku Ko, some of Dave Chang's recipes can be found here and here. [Esquire via Grub Street]

#Dave Chang
#Kimchi
#Lincoln Schatz
#momofuku
#nasa
#ramen
#space
Do you know the scoop? Comment below or Send us a Tip