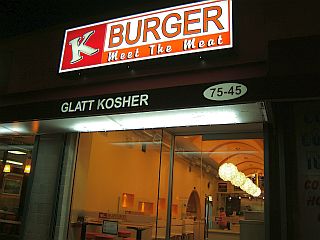 The other night we found ourselves craving shwarma as we strolled the stretch of Flushing’s Main Street that’s home to kosher groceries and dairy restaurants. As Gothamist approached Pita Hot, with visions of rotating meat dancing wildly in our head, we noticed an orange storefront out of the corner of our eye. Next to the utilitarian space that’s home to some of the borough’s best shwarma was a joint with a day-glo orange sign that read “K Burger Meet The Meat.” In the hopes of finding the kosher equivalent of Five Guys, we decided to give the four-month old spot a try. 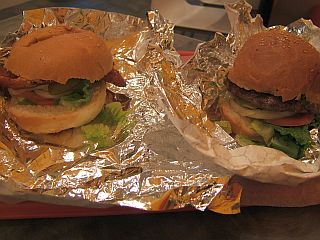 It's not unusual to find kosher burger joints in the neighborhood; the down at the heels Burger Nosh is only a few blocks away. Nevertheless there was surprise waiting behind K Burger's doors. It is literally connected to Pita Hot by a gigantic circular opening, although there's a sign telling K Burger's customers not to use the Pita Hot dining room. We took the fact K Burger is owned by the same folks as Pita Hot as good news and had high hopes for their burgers. Gothamist went with the signature K Burger, a six-ounce patty of fresh ground beef and our dining companion had the shnitzi, a fried chicken cutlet. Of the eight sauces we chose to top our meat with chimichurri, the garlic-laden Argentine sauce. While we're glad our companion enjoyed his schnitzel, K Burger's burger ranked just a cut above Mickey D's. Somehow K Burger managed to turn out a patty that was both gristly and juicy and top it all off with the blandest chimichurri ever to coat beef. They should do themselves a favor and use the Yemenite hot sauce from the other side of the house. K Burger would also do well to maintain the same food quality as Pita Hot. Maybe then it would have some meat worth meeting.