Florent Update: Restaurant to Stay as the R&L 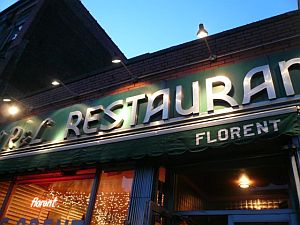 When we spoke with Florent Morellet on Monday, he assured us that his 23-year-old Meatpacking District bistro – scheduled to close this Sunday at 10 p.m. – would not be occupied by a Bank of America or some similar abomination. But the Parisian restaurateur stopped short of divulging the space’s fate – the landlord had been seeking $35,000 in monthly rent and it was naturally assumed that only the most crass retailers could manage a profit at that rate.

Now Eater has it that landlord Joanne Lucas couldn’t find any takers at the 35K level, so she’s going to manage the restaurant herself as the R&L, which was its name when her father ran it as a Greek luncheonette. (The name's also a no-brainer because Morellet never took down the old sign.) She tells Eater she’ll be keeping the staff and most of the menu, and Morellet will not be involved because he’s “moving on to a new chapter in his life.” Not bad, right? Now we know “the soap opera” ending Morellet was alluding to, which certainly beats the "luxury handbag” ending everyone was expecting.