Florent to "Close With a Bang" By the End of June 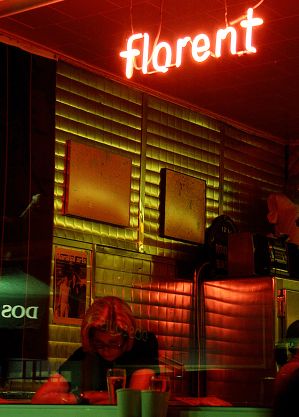 Florent, the beloved Meatpacking District hangout set to close this summer after almost twenty three years in business, will at least be going out in style, according to Frank Bruni, who spoke with owner Florent Morellet yesterday. The bistro's long goodbye will last five weeks, with each week dedicated to one of the Kubler-Ross stages of grief. Week One, starting Monday, May 26, will be Denial, with the remaining four weeks themed as Anger, Bargaining, Depression, and Acceptance.

Each theme week will have special dishes, decor and performances by familiar faces like burlesque star Dirty Martini, all leading up to a big sad send-off on June 29th, Gay Pride Day. The Post also mentions a writing contest in which entrants would share their favorite Florent memory, with the winner getting a free dinner on the last night. Morellet tells Bruni:

So many of our customers are either at the stage of Anger or Denial. Some are just in a state of shock. We’re going to gather together to go through those stages and celebrate those stages, and end with a bang, and with irony, which we’ve always done.

The quirky French bistro – housed in an old diner that was a speakeasy in the ‘20s and a favorite greasy spoon for longshoremen and meatpackers in the ‘50s – has become even more cherished in recent years as a corrective to the fratastic Bridge and Tunnel scene dominating the neighborhood. The closure is caused by the increasingly repetitive groove in New York’s broken record: obscene real estate prices. Once Morellet vacates, the lease will jump from $6,000 to $50,000 per month; odds are the new tenant won’t be operating an idiosyncratic bistro.