Back in 1985, when the meatpacking district nightlife was all about gay clubs like the Manhole and, as John Waters puts it, not getting mugged after a night of “watching men pay good money to get pissed on,” Frenchman Florent Morellet opened a bistro in an old greasy spoon called the R&L. Open 24/7, the place soon became a magnet for all sorts of soulful misfits drawn by the open-minded spirit cultivated by Florent himself. As the neighborhood grew increasingly obnoxious over the past decade, Florent became even more treasured as a sanctuary amidst what restaurant critic Frank Bruni called the “soul-crushing urban theme park” that is the meatpacking district. With the landlord now seeking $35,000 in monthly rent (up from the current $6,180), Florent will close Sunday, and one imagines the perimeter will be surrounded at once by velvet ropes. Or will it? When we spoke with Morellet earlier in the week he seemed guardedly optimistic.

In previous interviews, you’ve seemed unfazed by the loss of your restaurant. As the closing draws near, are you getting more emotional? No. [Laughs.] I’m getting more and more excited about the next stage of my life. Totally.

So you don’t feel any sadness about saying goodbye to this place, which you’ve given so much of yourself to? I think at the moment there’s so much to think about and so much to do in these last weeks that there will be a good deal of sadness right after. It will be at the stage when - you know, when somebody you love has just died you’re very, very busy with all the things you have to take care of so you don’t have time to deal with the sadness. But it comes back to hit you right when all the events are over and people paying their respects are gone. There will be time to be sad, but not at the moment.

Why do you think Florent has such a big place in so many people’s hearts? It was a home. The staff and I created more than a place to eat; we were a home, a place with political ideas, cultural ideas, graphic ideas. And it was a place where people felt comfortable - all kinds of people. I’ve received so much mail and the one piece of mail I like the most I’ll read to you: “Dear Mr. Morellet, I am an Upper East Side Republican vegetarian who had no business enjoying Florent. And yet for years it has been my happy place. Your restaurant always felt like home, oddly enough.” She goes on, but the beginning is so beautiful! I was a home for vegetarian Republicans and it’s quite great, what can I say? I think it was the restaurant of its time for the neighborhood and now the time is changing and the neighborhood has changed.

Now where do you suggest people go now when it’s 3 a.m. and they need to decompress? I have no idea! One of the good things about leaving the restaurant is that my boyfriend is currently the only one who is knowledgeable about other restaurants. I’ve hardly every eaten anywhere besides my own restaurant for 23 years, because when I’m off I’m cooking for myself at my lake house in Northern Jersey. 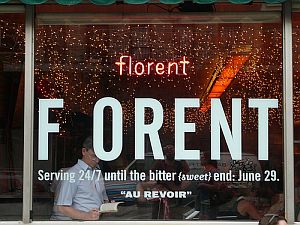 Have you heard anything about who the new tenant will be? [Long pause.] Something interesting is going on. I can’t tell you.

So it’s not going to be a Bank of America? Exactly. That’s the latest that I know. But I can’t say anything more about this.

What’s the situation with the gas? They came and closed the gas so my plumber could so some work. Now the work is done but it’s a bureaucratic snafu.

Will it be turned on before Florent closes? I hope so. The plumber is working on it but Con Ed is a little bit like old Russia sometimes.

You’ve been selling a lot of the decorations inside. That’s to raise money for the staff, so they have money to move on. I thought it would be a great thing to do and it allows people to have some memorabilia and some fun.

There are rumors about reopening a new version of Florent in the new Whitney planned for the High Line. That’s wishful thinking from [Whitney director] Adam Weinberg. At the moment I definitely don’t want to run a restaurant. But I’m interested in licensing and if people want to license Florent in other places like Miami or Vegas or whatever I’d love to take the concept forward and be involved with the design. But I don’t want the nuts and bolts of running a restaurant anymore.

So what do you have planned after this weekend when it’s all over? Well, my boyfriend Peter Cameron is a novelist and I’m going with him to Italy; he’s invited to Milan and we’re going to visit my niece in Tuscany. Also, I have a literary agent and I’m hoping we’re going to get a book deal about the history of the restaurant. That would be great and would keep me busy.

And you plan to stay in New York City? Oh yeah. I’m American. I’ve been American for 22 years; I was actually born American. I would say I was a geographical accident.

Some people say the closing of Florent is emblematic of New York losing its character. Do you think that’s true? New York’s character is always changing; that’s the nature of the beast. A city like Paris is not changing very much; it’s a bit of a problem for me. The New York I came to in the late ‘70s was a very depressed New York. And it was a city that lost a million people and had, I don’t know, over 2,000 murders per year. And every summer night I could see buildings burning from where I lived on the Lower East Side. It was pretty hard. I find that people romanticize their memories of what a place was when they were in their twenties.

There was a point when it was more pleasant in the ‘80s than in the early ‘90s and there was a point in the early ‘90s when it was a real nightmare; there were pretty much no more clubs and there was a point where people were not coming to Florent and one year we lost money. We used to leave the restaurant in groups of three because we were mugged all the time. But people forget; they were young and everything is possible when you’re young. People ask me if I like the neighborhood now and I don’t particularly like it, but there were times when I liked it less than I do now. It’s not linear; it didn’t start being this fabulous thing that kept getting worse. It’s not simple.