Five Very Good Veggie Burgers That Even Carnivores Will Like

It's Vegetarian Awareness Month, and we're celebrating by seeking out the city's best veggie burgers. Veggie burgers are a go-to for a vegan/vegetarian when no other options are available, since even meat-heavy restaurants and diners offer them up now. The problem is, they can vary drastically at each establishment, and it's not rare that a tough and overcooked, or moist and falling apart one finds its way onto your plate.

There are basically three types of veggie burgers: the bean-based, pea-based (these can be good but almost always fall apart), and the compressed patty. (Fine, there are also quinoa burgers, and those are always good so if you see one on the menu, get it!) So, who is serving up the best? Here are five decent veggie burgers, from the chain to the truck to the freezer. 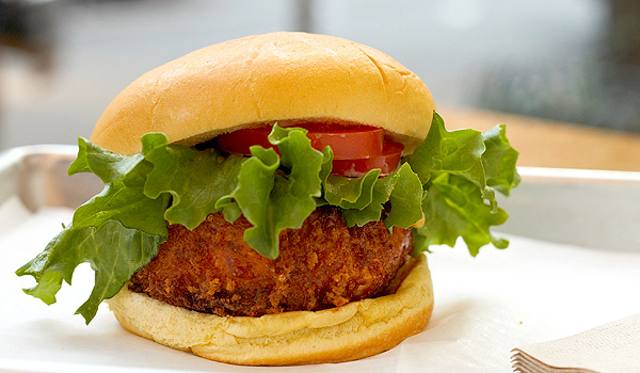 The 'Shroom Burger (via Shake Shack)

SHAKE SHACK: The 'Shroom Burger is amongst the least healthy things you can put into your body as a vegetarian. It packs a hefty 570 calories and more cheese than portobello, and it's perfect for nursing a hangover, but don't add it to your weekly menu. This thing really is about 85% delicious, gooey cheese, and comes with huge regret levels... but damn is it good.

KORZO HAUS: The Haus Veggie from Korzo Haus will make you forget the hodgepodge veggie burgers of your youth. Made from a base of beet-walnut black-eyed peas and blended with edam cheese, caramelized onion, caraway pickles and greens, the Haus Veggie led this meat-eating reporter forego his usual criticism of "Yeah, it's good, but it's not burger good." Consistency is key for this burger, which you can relish sinking your teeth into like any meat patty out there. Compliment it with one of Korzo's fried sides (We recommend the halušky, a Czech fried noodle dish) and one of their selection of Czech beers. — Aaron Marks 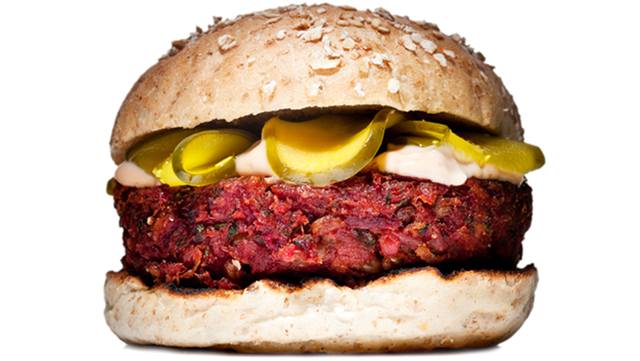 5 NAPKIN BURGER: If you check Yelp, you'll even find meat-eaters praising this place for its veggie burger offerings (from veggie burger sliders to veggie burger salads to your standard veggie burger). Their burger is thick, and consists of black beans, barley, brown rice, carrots, beets, jalapeños and sesame seeds. Add some pickles and creamy dressing and enjoy!

THE CINNAMON SNAIL: Patrick Kwan of The Humane Society of the U.S. tells us "the Vendy Award winner Cinnamon Snail vegan lunch truck’s gochujang burger made with seitan and topped with the famous Korean chili paste, kimchi, pickled daikon, arugula, black sesame gomashio and sriracha mayo" is simply the best in town. And we agree... in fact, none of the truck's offerings will fail to satisfy.

BOCA BURGER: You know of our love of Dr. Praeger's burgers, but there's another exceptional option in your grocer's freezer: the original vegan Boca burger. Boca has a lot of meatless products, and a lot of burgers, but this one tastes like it's fresh off the grill. To put things into perspective, this one only has 70 calories... that's 500 less than the 'Shroom burger.