Over the weekend, a giant tent took over a block of Columbus Avenue to house New Taste of the Upper West Side, a mutli-day feeding frenzy featuring some of the 'hoods best chefs. Saturday's event, Best of the West, brought together over 40 area chefs for several hours worth of eating, drinking and dancing, which we were lucky enough to score press passes to. Having attended lots of similarly-styled food events in the past, we were apprehensive about the pitfalls of bringing together crowds of aggressively hungry foodiots. Luckily for us—and the several hundred other attendees—New Taste transcended our expectations, creating not only a delicious environment, but also a relaxing and festive one.

Here's why we'll be setting aside admission money for next year: 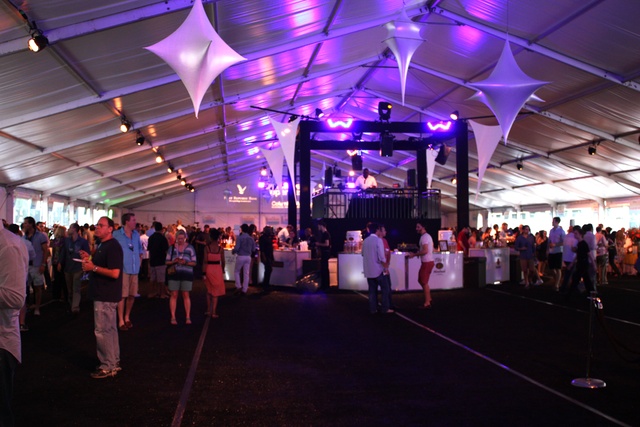 The Space: Namely, that there was so much of it. From the enormous main area underneath the tent to the much-needed tables outside (it was 90-degrees that night!), you never felt overwhelmed by the crowds. Additionally, because of the volume of vendors and the lower admission numbers, there was no waiting on long lines to get your hands on the grub. We waited for our food only one time, at Blue Ribbon Sushi, and that was only because they were making the hand rolls to order. 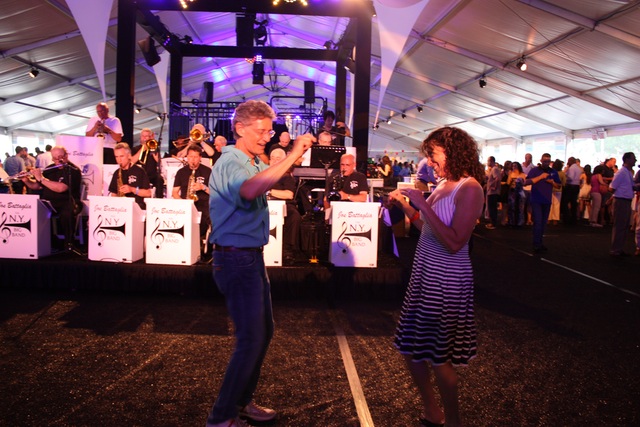 The Music: The entertainment at food events always plays second fiddle to stuffing your face. Not so here, as Joe Bataglia and his 17-piece ensemble, "The New York Big Band," had the crowd on their feet and swinging to the music starting early in the night. The copious amounts of booze on hand may have helped, but the band and its energetic performance deserves all the credit. 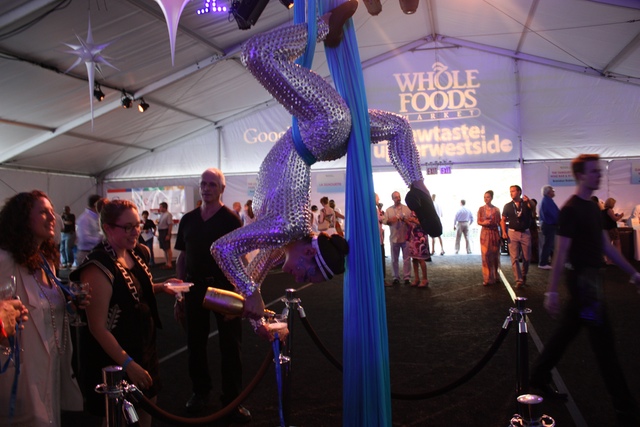 Yes, that is a woman dangling from the ceiling while pouring glasses of wine. (Nell Casey/Gothamist)

The Drinks: Speaking of booze, there is a lot of it, and it is all included in the (admittedly pricey) $135 admission price. Even if you get filled up on the eats early, there are a ridiculous amount of alcohol options to keep you in high spirits for the duration of the event. Do you drink beer? Have as many bottles as you'd like. Into the vino? Try glasses of multiple varieties. More into cocktails? How about a Tito's cocktail? Or a bourbon neat? Or a shot of Jaeger? You get the idea. But just in case you need further convincing, every attendee gets a wine glass attached to a lanyard that you can wear around your neck. 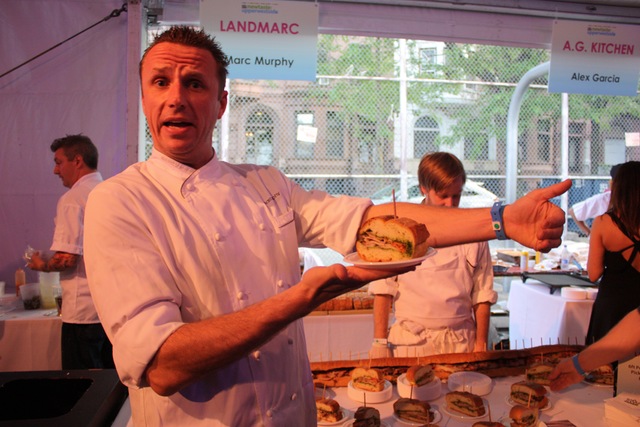 Marc Murphy shows us the length of his...sandwich (Nell Casey/Gothamist)

The Chefs: For people interested in the New York restaurant scene—or even if you just enjoy tuning into Chopped on the Food Network—New Taste offers a one-stop arena to chat up some of the biggest names in the biz. We chatted up Marc Murphy, observed cool kid (and the night's honoree) Danny Meyer plotting his next empire surveying the scene—even the Snapple Lady was there! It may not be the sole reason to buy a ticket, but it's a great added bonus if you have a little bit of food nerd inside you. 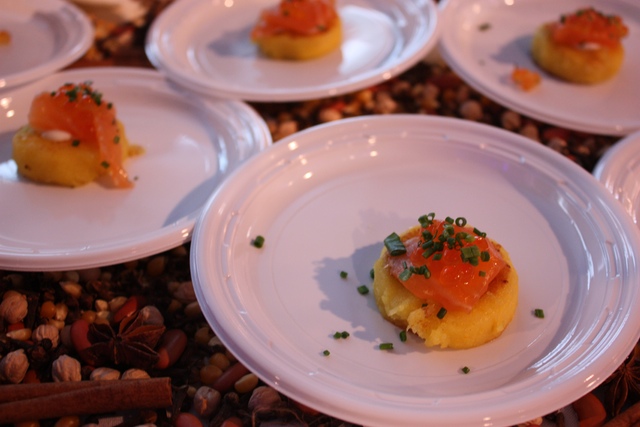 The Food: It should go without saying that the food was top notch, but having been victim to some meh dishes in the past, it was a joy to find so many incredible things to eat. From the outrageously fresh hand-rolled spicy tuna from Blue Ribbon Sushi Bar & Grill to the creamy cheese and fiery pepper-stuffed Capizza from Lincoln Ristorante, there were some truly transcendent flavors on hand. The highlight of the night: perfectly smoked, tender cuts of salmon resting on a sweet, moist corn arepa and topped with golden orbs of salmon roe from Calle Ocho Restaurant. We're already planning our dinner outing to tide us over until next year.

#food festivals
#foodiots
#new taste of the upper west side
#original
Do you know the scoop? Comment below or Send us a Tip