The Village Voice held their annual Choice Eats feeding frenzy at the 69th Armory last night and—loving a chance to eat across the city without leaving one giant, very crowded room—we were there. And we ate a lot. But, because when you go to these kinds of events you have to plan your attack very carefully, we avoided the places we'd eaten from before so as to have room for the places we'd never been. Well, mostly—we find the General Tso's Broccoli sandwich from No. 7 Sub hard to resist. So no Luke's Lobster Roll, Motorino or Del Posto for us. Which was just fine. We still managed to find some very choice eats along the way. Here are our five favorites: 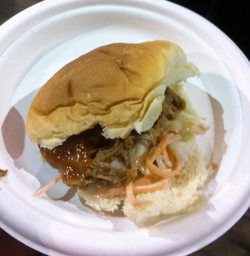 After our first lap through the Armory an acquaintance came up and insisted we try the pulled pork sandwich from this Thai mini-chain. They were not wrong. The slow-cooked pork is paired excellently with a crisp cabbage slaw and a lime and curry barbecue sauce to form the kind of sandwich bite we'd want served at our funeral. 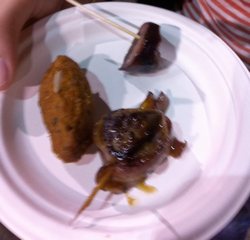 Some of the fare from O Lavrador
O Lavrador:

You wouldn't normally head to Jamaica, Queens for Portuguese food, but from their tasting last night it seems like it'd be worth the schlep. This Iberian restaurant had almost too much food to try, from fresh seafood salad to homemade smoked pork sausage. However, nothing was more drool-worthy than their beef tenderloin wrapped in bacon and served with béarnaise sauce. (Jaya Saxena) 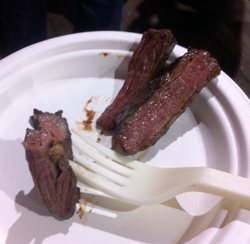 Greek food is easy to come by in Astoria, but rather than the typical gyros and souvlakis, Ovelia was serving skirt steak in a Greek coffee rub, giving an earthy taste to the juicy bite. The real restaurant also serves classic dishes like grilled octopus and whole fish, though a Greek-inspired brunch keeps them from turning into every other Greek place on 30th Avenue. (Jaya Saxena) 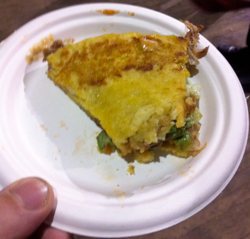 We mentioned this Venezuelan arepa place last year, but it's good to know that they're just as delicious as we remember. The soft and fluffy cornbread was packed with pulled pork and avocados, and they assured us that when they put pork, chicken and beef in one sandwich it comes out even better. Guess we'll just have to head uptown to put it to the test. (Jaya Saxena) 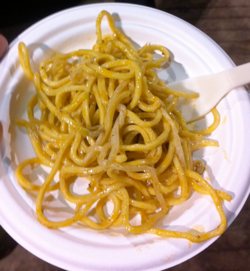 This Sichuan spot in Bensonhurst had some delicious spicy chicken on hand but what really surprised us were the elegantly tasty cold noodles. Perfectly cooked (which is hard to do on a scale like this) with a refreshing bite. Though the noodles didn't have the bells and whistles of some other restaurant's fare, it was one we kept thinking about after we'd left. Who knew there was graceful Sichuan in Bensonhurst?