Fish Cheeks Serves One Of The HOTTEST New Dishes In Town

Our latest installment of Quick Bites brings us to Bond Street where Fish Cheeks is serving up the spice.

THE VIBE
The location alone, in the heart of NoHo's high-end party zone, pretty much guaranteed that the new Thai restaurant Fish Cheeks would open with ample media attention, especially when fueled by one of the city's premiere food PR firms.

Add an appealingly beachy design, complete with a colorful striped awning to lure in the locals, and the solid pedigree of brothers/chefs/owners Ohm and Chat Suansilphong, and it's easy to understand why this place landed on a lot of must-try lists. (Before the Suansilphongs launched their trio of Obaos around NYC, the former worked in an acclaimed Bangkok restaurant, the latter for Tom Colicchio.)

And so I went ahead and tried it, sitting by the window on two consecutive evenings last week, my back to the cobblestones of Bond Street, eating early enough to avoid what could become a scene. The service here is attentive and warm, and though the tables are packed in a little tight (classic New York!), your seat and surroundings are comfortable.

Question remains: if you're just looking for some supper, is Fish Cheeks worth your hard-earned $50+ (per person, food only, plus tax and tip)? 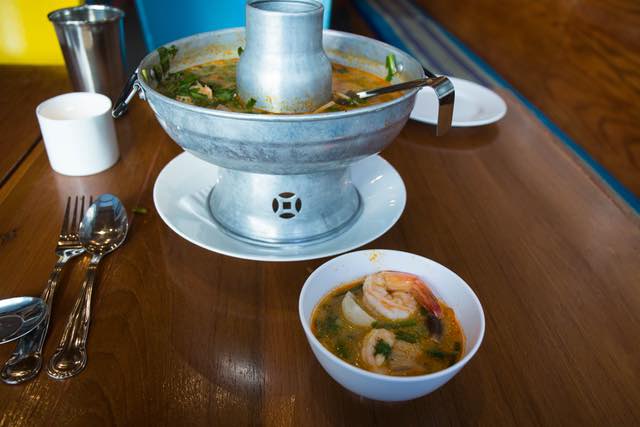 THE BITES
The Fish Cheeks menu is short, interesting, and mostly involves seafood. Everything is served "family style" which doesn't mean you get huge platters of food, but rather that everything comes out at the same time, with share plates all around.

The best thing I ate last week—and one of the spiciest dishes I've ever eaten in a Manhattan restaurant—was the Coconut Crab Curry. This is borderline dare food, thanks to an abundance of bird's eye chili, but the fat chunks of sweet king crab meat and thick, deeply-flavored curry (mortar and pestle crushed, per the menu) don't get lost under all the heat. The accompanying rice helps even things out as well. An excellent dish.

Also good is the Hat Yai Fried Chicken small plate, which somehow achieves the ideal balance between crisp and juicy without any breading or coating. The accompanying chili dipping sauce certainly doesn't hurt matters, either. Less successful is the Shrimp In Three Crab Sauce (also a small plate) upon which five crustaceans are served raw and gummy, and the single overwhelming flavor comes from the chunks of garlic.

The Tom Yum Goong is another hard pass. Not because the traditional Thai soup tastes bad—with copious mushrooms and plump shrimp in a milky, fiery broth, it's decent enough—it's just that, without any sort of starch involved and much of the dish's heft given over to seasonings (such as the too-woody-to-chew lemongrass stalks), it makes for an unsatisfying $22 "entree." Far more substantial, though also less flavorful, is the Goong Aob Woon Senn, a rustic pot filled with sweet, slippery glass noodles, accompanied by more of those shrimp and a couple of gray, baked-looking pieces of pork belly.

THE VERDICT
Fish Cheeks is a lively, pleasant place that isn't afraid to push the outer edge of your spiciness limits, but in these early days the dishes are still hit or miss.

Fish Cheeks is located at 55 Bond Street between Bowery and Lafayette and is open from 5 to 11 p.m. weeknights, and until midnight on Friday and Saturday (212-677-2223; fishcheeksnyc.com)