Belt buckles and minds were blown when the city's first all potato restaurant—not counting the delightful Pommes Frites (RIP)—opened on 6th Avenue a few years ago. They'll have some competition across Manhattan now that Burlap Sack has opened a similar concept across town in Murray Hill.

Both shops employ a Choose Your Own Adventure-style of dining, though Burlap Sack eschews any kind of "signature" creations, opting to let the customer decide which of the nearly 3,000 ingredient combinations they'd like to make. If you're like me and get overwhelmed at salad bars, prepare for a little bit of choice anxiety.

Jared Ringel and his business partners grew up in New Jersey in a town just outside of Philadelphia. Ringel told me the buddies were inspired to make the potato by the Canadian dish of poutine, which combines hot fries with cheese curds and gravy. They brought aboard head chef of Dos Toros Taqueria Miguel Franco to help execute their vision, which included bringing a "farm-to-fast casual" ethos to life. To that end, they're sourcing meat from organic spots like Free Bird Chicken and Sauder's Eggs in PA.

They're also bringing in a touch of home to their recipes, including a "Dad's Marinara" inspired by a childhood friend's dad and meat seasonings courtesy of Franco's great grandmother. "We want our customers to be hugged by our food and flavors," Franco told me while explaining that the tiny turkey meatballs were all lovingly rolled by hand. With the exception of the frozen tots, everything at the restaurant is made fresh daily and, in the case of the sweet potato and regular french fries, fried to order. Even so, the team says that each order will be ready to go in under three minutes. 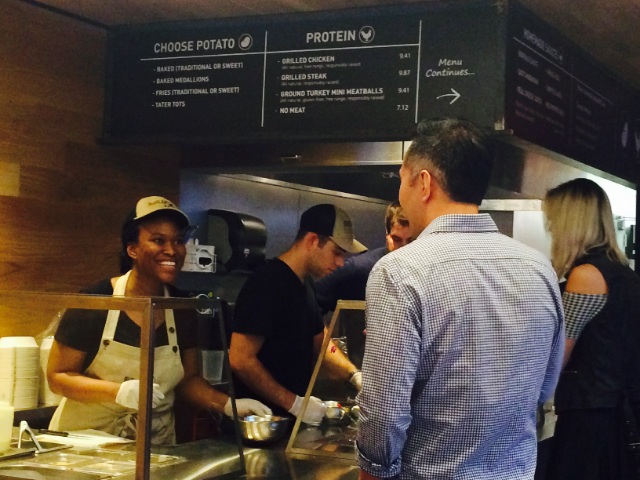 Orders start with a choice of potatoes—I was told the Baked Medallions have been an early hit—followed by a choice of proteins, including succulent sirloin steak, grilled chicken and the turkey meatballs. From there, the choices really get wild: multiple types of cheese, including a queso sauce; cooked vegetables like mushrooms and peppers; cold veggies like olives, broccoli and chives; and finally a choice of sauces, including simple sour cream and chipotle mayonnaise. Everything, including the meatballs, is gluten-free. By the time you're finished, you can barely see the potatoes under the weight of all the toppings.

But the gut bomb tastes good, really good. The meats are tender and full of flavor, the potatoes soft and comforting, something the team took extra care to make a reality. Everything from the name to the rich food is meant to evoke a homey, old school feeling, like you're just one of the guys on the farm. It's certainly hard to evoke a pastoral theme on the frantic corner of Third Avenue and 34th Street, but when you're stuffing forkfulls of cheese-laden potatoes in your mouth, the setting doesn't much matter.

For now, lunch and dinner are the busy times, though the 1 a.m. closing time (for now) should be a hit with local bar crawlers. Brunch plans are already in the works, too, with guarantees of a "Two Minute Hangover Cure"—meaning the amount of prep time and not the meal's ability to nip hangovers in 120 seconds, sadly—and egg-topped potatoes on the menu.

#burlap sack
#murray hill
#potatoes
#original
Do you know the scoop? Comment below or Send us a Tip