It took longer than you might expect, but this week Willliamsburg finally got its first bona fide food hall with the grand opening of the 15,000 square-foot North 3rd Street Market, run by a group called MRKTPL (they operated the original Gansevoort Market, but under a different name), and located between Berry and Wythe.

Well, it was actually more of a soft opening—June 4th is when everything is now scheduled to be ready—but still, there were several vendors in there on Tuesday slinging their stuff, and enough of the design was done and in place to get an idea what the finished market will feel like. And it feels good! Bright, spacious, smart pedestrian flow with comfortable chairs and a nice forest vibe going on at the entrance. 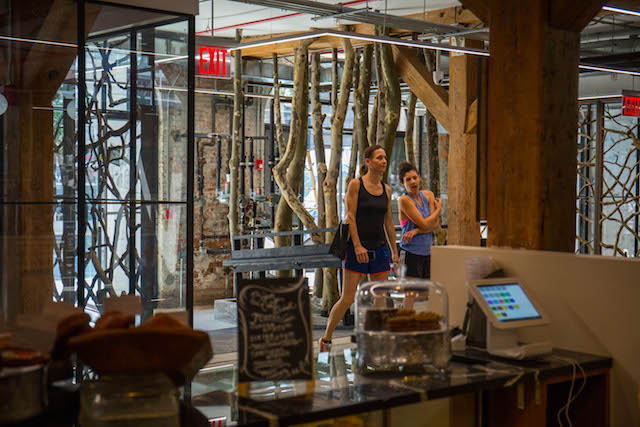 But it’s the food lineup, featuring many names that you don't normally see at such things, that really makes the North 3rd Street Market exciting. Jajaja, the vegan Mexican place on East Broadway, has a booth here, and they were open for business at lunch yesterday, serving dishes like "Chorizo" Nachos, Chipotle Sweet Potato Burritos, and some excellent Mezcal Mushroom and Palm Carnitas Tacos. Another plant-based outfit, Harvest2Order, was also ready, and their couldn't-be-fresher microgreens, literally harvested in front of you, made for a screamingly healthy salad. Acclaimed baker Bien Cuit, coffee masters Champion, and rookie Sweet Road Bevs, which specializes in fresh drinking vinegars, rounded out your soft opening options.

Most of the heavy (and meatier) hitters are coming soon. Pizza legend Di Fara has a booth that's almost ready, as do those LES Italian sandwich mavens at Regina's Grocery. Brooklyn's own Chuko is handling the ramen duties, Corner Bistro will be grilling up their excellent burgers, and Lobster Joint will satisfy your crustacean cravings.

Rockaway's Sausage Hero is making the trip inland, East Wind Snack Shop has all your dumpling needs covered (along with Baba's Pierogies), Go Fish is doing sushi, and TAP NYC will be serving a menu filled with traditional Brazilian favorites. And for dessert (in addition to Bien Cuit's pastries), Dana's Bakery will have macarons, and the great La Newyorkina will be scooping its superb ice cream, infused with the flavors of Mexico.

#north 3rd street market
#nyc food halls
#williamsburg
#original
Do you know the scoop? Comment below or Send us a Tip
A new Gothamist is coming! We’ve moved comments over to our beta site. Click here to join the conversation and get a preview of our new website.