Last summer, Dylan Dodd was browsing through antiques in Seattle when he came upon a small wooden figurine—a crow, carved in a Japanese style. Admiring its simple design, Dodd bought the tiny bird and brought it back to Brooklyn. He struggled to come up with a name for it until one of his Japanese chefs suggested Karasu. Rough translation? "Little crow."

Hidden behind a large blue door in the back of Fort Greene's Walter's is Dodd's new restaurant Karasu, a cozy yet refined Japanese restaurant and cocktail bar. The food is a take on what Dodd and co-owner Danny Minch call "Kyoto-style dining," which values seasonality above all. Head chef Yael Peet's menu takes cues from izakaya, kaiseki, and robata cooking styles, and her delicious seafood and vegetable plates should be ordered as one cohesive meal.

Since opening late last week, Karasu is offering bowls of Japanese potato salad topped with miso ($7) and bonito-showered rutabaga ($6). Both are crisp and delicious. Peet's menu also boasts octopus slow-braised in onions and sake, house-made pasta with uni, and an aged prime ribeye steak rubbed with fermented koji rice (the latter of which is mouth-watering enough on its own, but when dipped in its accompanying vinegar sauce approaches mind-altering levels of deliciousness that are well worth the $65 price tag).

It's a far cry from the ramen and sushi kitchens that have saturated New York, and Peet stresses that her menu is inspired by modern Japanese tastes, including foreign plates that locals in Tokyo and Kyoto have adopted as their own.

"Since we opened, diners have been really adventurous and tolerant, which is all I could ever ask for," the chef said. 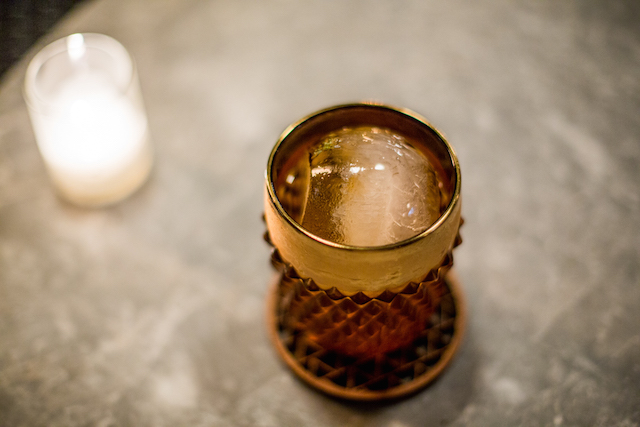 The focus on modern Japanese favorites extends to Karasu's bar, which is headed up by ZZ's Clam Bar alum Thomas Waugh. The smoky-sweet "Thrice Rice" is a Japanese take on horchata that includes rice cake, sake, and Laphroaig scotch, while the "Dippermouth" (named after Louis Armstrong) augments the old fashioned by adding black walnut and creme de banane (both $14). Want something simpler? Waugh is serving plenty of sakes, shochu, and Japanese whiskeys straight up. "It's been a really amazing late night vibe in here with people drinking until 2 a.m.," Dodd said.

The windowless space Karasu occupies was once a chiropractor's office, and as Dodd and Minch gradually built its ceiling, walls, and bar, they realized their plan for a casual neighborhood spot was becoming more intricate by the day. "It was really a vanilla box," Dodd said, "and for better or worse the way we designed it was just by doing one thing and then moving on to the next." Karasu's deep blue walls are accented by blond wooden screens imported from Japan, and its bar is lit by tall art deco sconces. A turntable spins jazz records at a level that encourages both raucous conversation and thoughtful solo drinking.

So much of Karasu just looks, sounds, tastes, and feels good (and in the case of the steak, perhaps too good). Inside, everything feels patiently detached from the outside world. Dodd, Minch, Peet, and Waugh have made something much finer than perhaps even they originally expected. If you've got dreams of a trip to Japan, make a detour to Dekalb Avenue.