When Kalima DeSuze and her husband were working on the storefront of their new feminist bookstore/coffee shop on Prospect Place in Crown Heights last summer, DeSuze says that some longtime residents were surprised to learn that an Afro-Latinx was behind the business.

DeSuze is a native Brooklynite, a social worker, and a book lover. She’s had the idea for the bookstore for a few years and wanted to combine that with a community space.

“I started thinking about what kind of business I wanted outside of my career and I thought about the things I loved the most,” she said. “I looked around my apartment and thought, oh a bookstore!”

Located five blocks from the Nostrand Avenue subway stop in the heart of a rapidly gentrifying neighborhood, DeSuze knows that some may consider Cafe Con Libros part of the wave of wealthier newcomers. But she wants patrons to see that her shop isn’t just catering to those who have the disposable income for books and coffee.

The cafe menu includes different coffee options, tea, scones and other baked goods. Nothing is over $5 except the mug and totebag.

DeSuze added, “There are different ways businesses can be socially responsible, they can have staff that looks like the area, and understand the history of neighborhood.”

Cafe con Libros features titles like “I Am Jazz” a book about a transgender girl, picture books about feminist icons, and a picture book about children who were sent to a Japanese internment camp with their families after the attack on Pearl Harbor.

There are also biographies about famous women, their experiences across different cultures and a LGBTQ section.

“When a queer person looks up to the left of the register to all the queer books, they see that I am not afraid to talk about queer issues, that really means something to me,” said DeSuze. 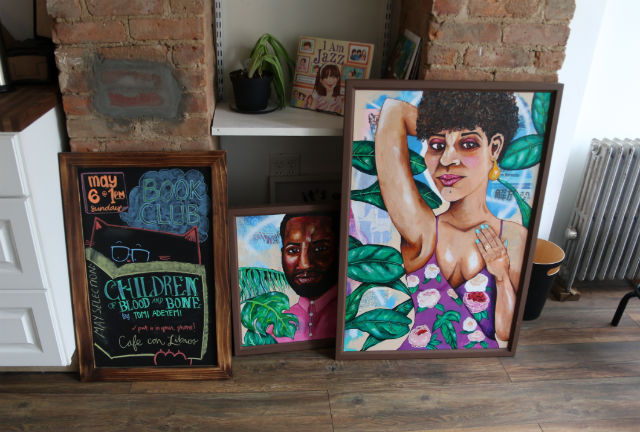 DeSuze says that a lot of the books she carries about Celia Cruz, the Cuban salsa queen that helped define the genre, tend to sell out pretty quickly. She’s excited that there’s a customer who brings in a child every few weeks to pick out a new book.

“I want them to know that when you’re curious about an experience outside of your experience, you become so much more of a full human being when you read that book,” she said.

Noëlle Santos, the founder of The Lit Bar in the South Bronx, billed as the only independent bookstore in that borough, told Gothamist that “it’s lonely out here in the book industry.”

“There isn’t a lot of diversity of the book selling business,” Santos said.

She’s right. The majority of people involved in publishing, book selling, and advertising are white.

Vina Castillo, one of the founders of Kew & Willow Books in Kew Gardens, said, “There are so many diverse cultures that aren’t represented and we need more bookstores that highlight that.”

Santos thinks more small book stores, especially ones owned by women of color in New York, should be supported since those are the locations that “bring people from different worlds together.”

(Bklyner recently made a handy map of black-owned coffeeshops in the borough.)

DeSuze says the goal of Cafe con Libros is to bring people together and expose them to different ideas and lifestyles. She plays music like salsa, hip hop, and jazz, and displays the work of a local artist and plans on doing that in the future as long as the work is feminist-friendly.

DeSuze also has a book club at Cafe con Libros that includes people who grew up in Brooklyn and new Crown Heights residents. They’re currently reading Children of Blood and Bone by Tomi Adeyemi, and have read four books so far that span different genres and represent the kinds of people that are a part of the group.

“It’s interesting when we get there and people who didn’t know each other come and sit down together,” she said. “It’s so lovely to have this bond.”

#cafe con libros
#Crown Heights
#original
Do you know the scoop? Comment below or Send us a Tip