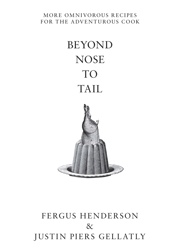 is considered a classic. It contains recipes such as Blood Cake with Fried Eggs, Tripe Gratin, and Crispy Pig’s Tail. Stuff like that. This isn’t stunt eating, Fear Factor-style, nor is Henderson’s food supposed to be particularly innovative, but it is. The chef’s “I can’t believe I ate the whole thing” approach to cooking simultaneously emphasizes frugality and simplicity. In some sense, that's almost unheard of these days.

Not every recipe in the book trots out trotters among its ingredients: The Whole Beast includes a few fish recipes (granted, one involves herring semen); there are even some vegetarian dishes. But it’s always the offal, or slimy, gooey, bloody, smelly foods- that intensely divides diners. None of this is shocking: contemporary American cuisine still hides its fried liver under piles of sautéed onions, saves its giblets for gravy (if at all), and has all but banished anchovies to pizza topping land. Regardless, Fergus Henderson’s new book, written with Justin Piers Gellatly- Beyond Nose to Tail: More Omnivorous Recipes For The Adventurous Cook

has just been released, and it contains another round of intense recipes. The chef is in town next week and will be signing copies at Gothamist favorite Kitchen Arts & Letters on Monday October 8th, starting at 3 PM. 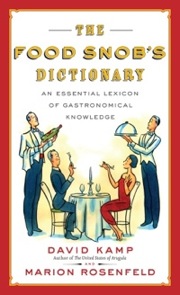 Editor and writer David Kamp also has a new book being released next week. Written with Marion Rosenfeld, The Food Snobs Dictionary: An Essential Lexicon of Gastronomical Knowledge (the third release in the Snob series) takes a conveniently alphabetized and close look at the kind of food culture zeal that has sort of swept America off its clogs. This is the eye of the hurricane, people: a takedown of food terminology that currently pervades everything from menu descriptions in fancy restaurants to greenmarket chatter overheard near the Chioggia beets. The book includes a helpful pronunciation table for the names of various food-related people (“Don-YELL Boo-LOO”), and also packs in a lot of esoteric and useful information, such as the fact that panko contains a good amount of “trans-fat-laden partially-hydrogenated oils.” Kamp even writes that Fergus Henderson is a “Poindexterish English chef known for his gutsy, ballsy embrace of guts and balls.” Some entries lack vital information- “Sunchoke” neglects to mention the tuber’s ineluctable knack for inducing flatulence. All told, however, the book manages to smooth over a lot of food culture buzzwords with humor and buzzkill, with all the finesse of a steamroller. As Martha Stewart might say, looking down at a plate of heirloom whatever salad, “it’s a good thing.” David Kamp will be on a panel at The New York Public Library next Wednesday to discuss the culinary legacy of Julia Child; he’ll also be at the Greenwich Village location of Gourmet Garage with copies of The Food Snob’s Dictionary on October 18th from 6-8 PM.