Feed Your Mind: Beard on Food 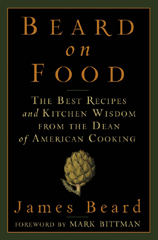 Beard on Food: The Best Recipes and Kitchen Wisdom from the Dean of American Cooking

was first published in 1974. This collection of Beard's favorite newspaper columns has been reissued to coincide with the 20th anniversary of the James Beard Foundation, the culinary haven and educational institution created in his honor.

The short columns are a pleasure to read, combining culinary education and history with easygoing recipes, travel stories and are brimming with his love and enthusiasm for his subject matter. Considering they were first released in 1974, when American tastes were not nearly as expansive as they are today, some columns, like "How to Cook Fish Without Heat" on ceviche were likely addressing foreign territory to many. Beard introduces readers to ingredients ("Capers in the Kitchen"), techniques ("Anatomy of a Chicken"), and food from his travels ("The Flavor of Catalonia") with a friendly, approachable style. This edition features a new foreward by Mark Bittman in addition to an earlier introductory note from Julia Child. $26.50, Bloombsury.