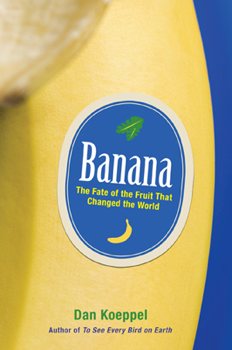 Just how well do you know your morning snack? [Cue ominous music] Find out tonight at KGB Bar when Dan Koeppel, author of Banana: The Fate of the Fruit That Changed the World, reads from his book. Koeppel’s dedication to unpeeling the history of the fruit (turns out it’s actually a berry) admirably resists puns like the one found at the beginning of this sentence, and what seems at first to be another “single item history” nonfiction food book (Potato, Salt, Beans, Caviar, Vanilla) at times brims with manic, even evangelical writing, but Koeppel has good reason: It turns out the modern banana crop is the lynchpin for more than a half dozen topical issues, everything from terrorism (including state-sponsored terrorism) to the locavore movement.

A well-drafted flow chart might even demonstrate just a few scant degrees of separation between bananas and the JFK assassination. Now there's a danger that blight could ruin all the world’s crops, leading in part to the book’s discussion of test tube bananas.

The historical side of Banana is filled with sort of unbelievable footnotes, like how in the 19th century a 23 year-old Brooklynite named Minor C. Keith helped create the modern banana industry as we know it in Costa Rica. On the subject of banana peels, whose sidewalk perils led to what is now just a curious footnote in New York City history: Prompted by slippage around the turn of the 20th century, an ex-colonel named George Waring created the “first large-scale recycling effort in the United States.” For a while, banana peel cleanup and composting from the city’s sidewalks and gutters was enforced by the NYPD.