Feasting With 4Foodies at 5 Ninth 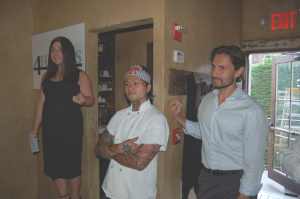 The last time we saw Dan "Chino" Perilla, the new chef at 5 Ninth, was about two years ago. He was gleefully cooking up sweetbreads to stuff into roulades made from pig face. Actually that's not entirely true, the last time we ran into him was at a birthday for his former boss, Zak Pelaccio. So when Gothamist heard that 4Foodies a newly launched online community for folks obsessed with all things food was holding its inaugural event at 5 Ninth last Tuesday, we rushed over to the meatpacking district.

Gothamist arrived a tad late so we missed out on the spicy mango papaya salad with tamarind sauce, which is too bad, it would have been quite refreshing on that humid evening. But we didn't miss out on 4Foodies founder Stephanie Kornblum's introduction of Chef Chino. Despite his fearsome tats, he stated, "I'm proud to take on the lineage that's been handed down to me," and was honored that 5 Ninth was chosen as the site for 4Foodies first event.

We slaked our thirst with a few Palomas, 5 Ninth's signature drink made from tequila and Jarritos grapefruit soda. There were many food industry types hobnobbing -- eaters as well as chefs -- including Robbie Richter, the pitmaster of Hill Country.

As for the food, there were some old favorites, including 5 Ninth's upscale take on a Cubano made with Berkshire pork shoulder and prosciutto di Parma as well as succulent roasted Bobo Farm's chicken. But Gothamist's favorite dish was new one on us, a luscious bowl of braised Vermont lamb shoulder served over saffron risotto.

Join 4Foodies at their next event on August 27th, a preview tasting from Jehangir Mehta's Graffiti, due to open in September.