Feast On Broken Promises At Baron's In Bed-Stuy Our latest Quick Bites brings us to Bed-Stuy for, well, we're not quite sure what...

THE VIBE
Did you ever go to Dekalb Restaurant, kind of across the street from the Home Depot in Bed-Stuy? Then you will be familiar with the look and feel of Baron's, a brand new restaurant that opened in the space last week.

Baron's has kept the dramatic interior of Dekalb largely intact. Still in place are the windows salvaged from an abandoned hospital in Connecticut, lining the walls and ceiling of the lovely back dining room. Half the seating is handled by repurposed church pews, which may or may not be a comfortable place on which to settle in for a long meal; I sat at the bar, on a backless stool also made from salvaged materials, and it was fine. And in the front bar-and-eating area, those frosted glass doors from long-shuttered medical offices still dominate the room (especially since the shelving is mostly bare), while a large Gothic-looking wooden chandelier hangs over the proceedings.

It's not surprising that Baron's didn't change much of the decor. For one thing, it's pretty sweet. For another, the new restaurant is managed by the father of the owner of the old restaurant—elder is Mark Fahrer, a seasoned caterer, who took over from his son Stefan—and it's all less than two years old, so...

The big difference here, and the thing that makes this a legitimately new restaurant, is the presence of chef Vitorio Bar in the kitchen, who brings an entirely different menu to Baron's, one that the opening-day press promised would emphasize nose-to-tail, farm-to-table cooking. But is that promise fulfilled?

THE BITES
First let me say that everything I ate at Baron's was fine, and some of it was borderline great, but the food here is not as advertised.

To take the most obvious example, my Sprouts and Grain Salad had neither sprouts nor grains, but was instead your basic bowl of arugula and grape tomatoes, with a few pomegranate and sunflower seeds thrown in for fanciness sake. It was a decent enough salad (pretty sure it didn't need those craisins though), but where were the promised pea shoots? Where were the grains? Nowhere to be found.

I understand that sometimes restaurants run out of ingredients and have to substitute during a rush, but: a) I was among the first diners of the evening, b) the menu is composed and printed out daily—presumably to take advantage of whatever looks best at the morning market—so they must have known they couldn't deliver on the dish as written, and c) my server, the bartender, failed to mention any changes to the dish. 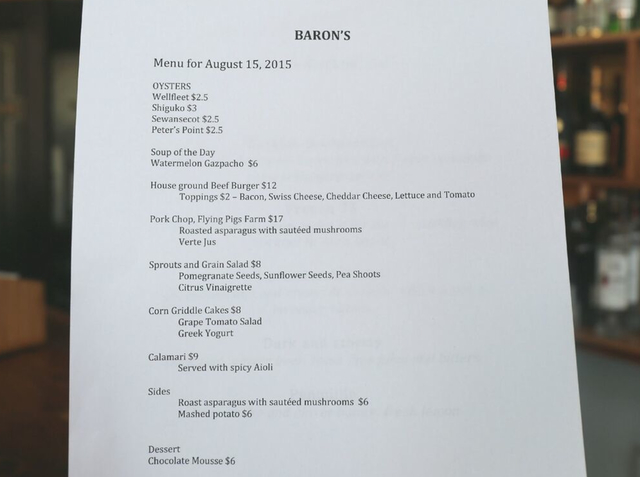 It's not a huge deal I guess, but when you order something at a restaurant, you kind of want it to actually be that dish when it arrives, and not just some random other thing in the same category. Also, for a place touting its commitment to farmer's-market freshness, it all looked and tasted grocery-store bought to me.

This was only the most blatant of the Baron's bait-and-switch tactics. A more general misrepresentation can be found in the "whole animal cooking" hype. Since there was no menu available online at the time, and an email requesting one went unanswered, I arrived in Bed-Stuy hoping for exotic terrines, lamb's-head platters, trotters and tails... and instead found a burger (which I guess can include bits from the entire cow), and a pork chop.

I ordered the chop, purported to be from Flying Pigs Farm, and it was a nice piece of grilled meat, mostly juicy and appropriately fatty. Even better, though, were the generously-portioned sides, including a mound of good mashed potatoes and a terrific charred-up asparagus and shiitaki mushroom combo.

I also tried the Corn Griddle Cake, topped with a salsa and Greek yogurt. This was probably mushier than chef Bar would have liked, but it was lively and sweet, as if the corn was cut from a cob not too long ago.

THE VERDICT
It's hard to know where Baron's is headed (another example: an advertised oyster happy-hour special didn't seem to be happening), but right now this is more neighborhood pop-in than any sort of destination restaurant.

Baron's is located at 564 Dekalb Avenue, between Bedford and Nostrand Avenues, and is open daily from 5:00 p.m. to 12:00 midnight, and until 1:00 a.m. on Friday and Saturday nights. Prices are reasonable, but it was CASH ONLY last Saturday (and still?), which I wasn't warned about until I handed the bartender my card to pay for my meal, oops. (718-230-7100; barons-brooklyn.com)

#baron's
#bed stuy
#quick bites
#original
Do you know the scoop? Comment below or Send us a Tip