THE VIBE
There's a new barbecue joint on the border of Inwood and Washington Heights called Fat Pig (from the owners of nearby popular tapas spot Marcha Cocina), which just opened on a stretch of Dyckman Street. It's got a friendly-neighborhood feel, with tattoo parlor Black Attic upstairs, and plenty of sidewalk socializing going on in front.

Fat Pig is, ironically, quite slender, with one picnic-sized communal table up front, and a single row of raised four-tops opposite a small bar as you head back to the carving station. The decor is a bit of a mish-mash, with florid murals on the walls as well as roadhouse-esque touches. Sports plays on a trio of television sets above the bar.

Unlike some by-the-pound places, Fat Pig is a table-service establishment, with friendly servers not afraid to give their opinion about what you should order. There are cocktails and about 14 beers on tap, and all of the various menus are printed charmingly on brown paper bags or pieces of scrap paper. This is an easy restaurant to like, and a comfortable place in which to spend your evening. 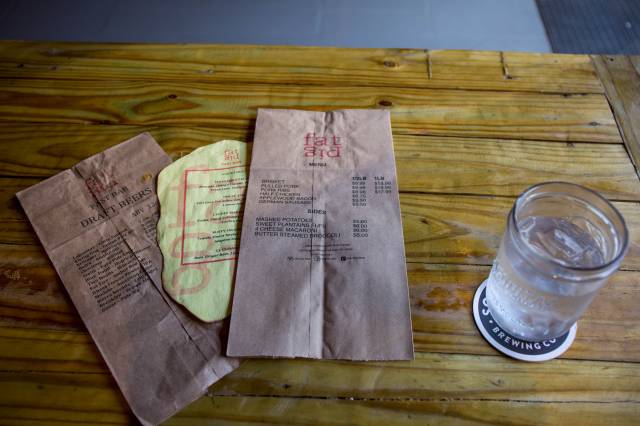 THE BITES
The Fat Pig food menu is short enough that I was able to eat most everything on it during a single visit last Friday night, and all of it was good. The best thing here are the Pork Ribs—this is true at most barbecue spots, but the Fat Pig crew does a really nice job with these: they're tender, moist, a little sweet and a lot peppery. The Brisket is solid, with enough caramelized fat and smoky flavor to carry the somewhat lifeless "meat" part of each slice. A squirt of one of the three decent sauces that arrive with your meal—a regular BBQ, a slightly hotter Jalapeño version, and a subtle Tamarind—helps here as well.

The German Sausage didn't seem terribly Bavarian—more like chorizo to be honest—but it was pretty delicious, oozing juices and delivering a spicy kick. The side of 4 Cheese Macaroni was almost soupy, but still had enough salty, chewy presence to hit all the spots you want such a dish to hit. More interesting, though, was the Sweet Plantains Fufu, a deeply funky African dish made here with mashed ripe banana, cassava, maybe some corn (it was honestly hard to sort out everything going on) and studded with wonderfully gamey bits of pig.

The bread side you'll get comes in the form of potato rolls, which are good things to eat with meat and sauce, and, really, they taste better than the generic slices of white bread I've been given at most BBQ places. One of the owners told me they're trying to find a local bakery who can supply them with more soft-bread variety, so this situation might change by the time you get there. 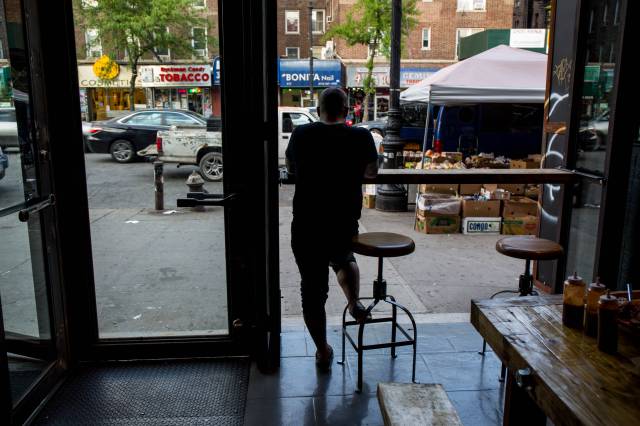 THE VERDICT
Fat Pig serves up satisfying barbecue in a pleasant, low-key atmosphere at reasonable prices. Obviously this is good news for locals, but it's also a viable option if you live along the upper end of the 1 train, are craving some ribs, and don't feel like waiting three hours for a table at Dinosaur.

#fat pig
#inwood
#quick bites
#Washington Heights
#original
Do you know the scoop? Comment below or Send us a Tip