Last week, multiple class action lawsuits were filed by McDonald's workers in New York, California, and Michigan alleging wage theft by the multi-billion dollar food service corporation. The claims included being prevented from clocking in at the time of employees' scheduled shift, no overtime pay, and no compensation for the purchase and maintenance of uniforms. This afternoon, Public Advocate Tish James joined the fray in a demonstration in front of a Herald Square McDonald's, announcing a plan to introduce an anonymous whistle-blower hotline and expand city authority regarding wage theft violations.

The demonstration took place in light of the announcement yesterday that New York Attorney General Eric Schneiderman had settled with the owner of seven McDonald's franchise locations in New York for $500,000, which will be distributed to more than 1,600 current and former employees. New York has been highly visible in the fight for fast food workers rights, with Schneiderman introducing a Fast Food Worker Complaint Form, high-profile walk-outs and protests, including today's latest rally. 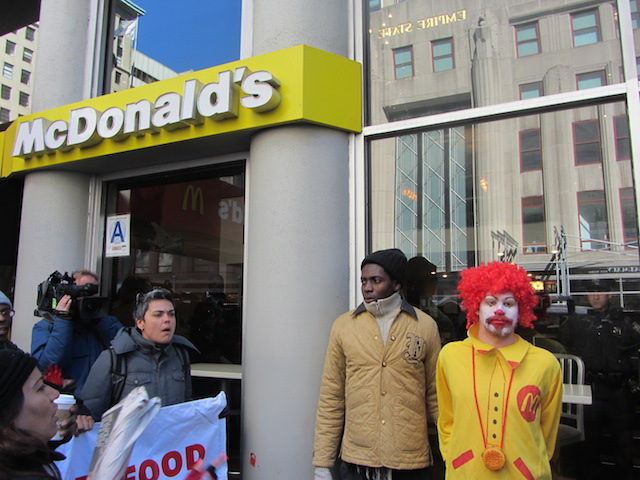 Around 11:30 a.m. a group of about 25 protestors arrived and made their way into the McDonald's on 5th Avenue and 34th Street. They streamed in slowly and surreptitiously before beginning their demonstration. Police then removed journalists from the premises and prevented others from entering, swiftly pushing out any form of video or photography. A man dressed as Ronald McDonald was marched into and around the restaurant with his hands behind his back amid chants of "Shame on you!" from the crowd. Nearly 10 minutes passed before the group was clear of the McDonald's and reorganized outside.

On the street, the group first read Ronald McDonald his rights, indicting him for crimes against workers; upon listing his right to an attorney should he not be able to afford one, the crowd jeered "You can!" A few speeches from fast food workers followed. "When you're living on the edge like me," Franklin, a 23-year-old employee at McDonald's told the crowd, "every penny counts." After complaining to his managers about not being reimbursed for his uniform upkeep, Franklin said they told him that a "McDonald's computer system" wouldn't allow them to make the adjustments. 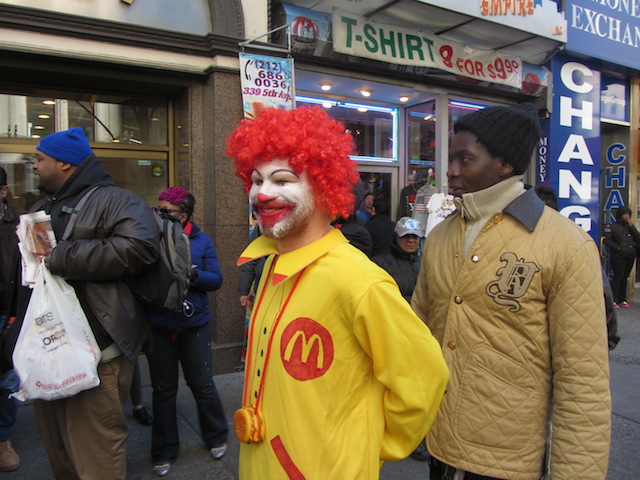 The settlement reached by the Attorney General was with a single franchiser and not the corporation. "Evidence in suits filed last week in California and Michigan shows that McDonald's exerts control over the daily operations at its franchise restaurants, making it just as responsible for the illegal pay practices," said Fast Food Forward Director Jonathan Westin. "McDonald's made nearly $5.6 billion in profits last year, enriching itself on the backs of workers who simply cannot afford to have their wages stolen." 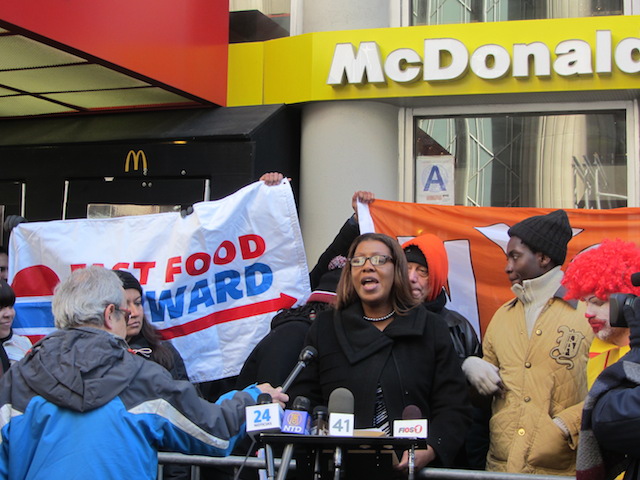 Public Advocate James arrived to conclude the protest and announced that her office "will establish a hotline for whistle-blowers to report wage theft and empower city agencies with the ability to investigate those claims." She told reporters afterwards that she wishes to make violations and violators public, and would call on the city to "cease contracts" with guilty organizations. "These companies should pay their employees enough to support their families."