Fast Food Calorie Info Coming Soon, Like It Or Not 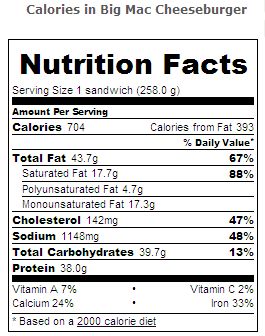 Today the Board of Health is expected to pass regulations requiring 10% of the city's 23,000 restaurants to prominently display calorie counts on their menus. A previous push to require calorie disclosure was blocked by a federal judge in September; the new rules will be mostly limited to fast food restaurants that have 15 or more locations nationwide.

And the restaurant industry is expected to take the city to court again. In a statement to the Daily News, Justin Wilson of the Center for Consumer Freedom derided the city's “nanny-state public health policies. It doesn't take a Ph.D. in nutrition, let alone a high school diploma, to tell the difference between a 12-piece bucket of chicken and a salad.”

Of course, the CCF – formerly the Guest Choice Network – has long been the aggressive P.R. front for the tobacco, alcohol and restaurant industries. This is the same group that runs ads dismissing America’s obesity epidemic – the nation’s second leading cause of death – as “hype.” City health officials insist the regulation will result in 150,000 fewer New Yorkers becoming obese over the next five years and at least 30,000 less diabetes cases.

Depending on the litigation, the calorie displays could be shaming you toward the salad bar as soon as March 31st, so ignorance is still bliss for the next couple months at least – provided you steer clear of Calorie-Count.com, where we got these impressive Big Mac Cheeseburger stats.