Hidden behind a ghastly pile of construction supplies and other debris resulting from the DOT ripping up Fulton Street, you'll find the deluxe new gastropub The Fulton, which opened last week. The guys behind "upscale" sports bar The Ainsworth have teamed up to create a clubby environment where hedge fund bros can bring their dates on game night. The gigantic space is divided into a bar area and a separate dining room up a couple of steps, and both areas feature tufted leather banquettes and plenty of flat screen TVs cleverly disguised behind mirrored glass and antique picture frames.

The menu, by chef John Bond (STK Miami), is of the sophisticated comfort food variety, and ranges from small plates to full entrees. Options include an Organic Frenched Brick Pressed Chicken (Fingerling Potatoes, Roasted Shallots, Chicken Jus), a Risotto with Lobster and Black Truffle Oil, and Buttermilk Fried Chicken Fingers (Sweet Chili Sauce, Honey Mustard). You can peruse the full menu below, but The Fulton's appeal isn't so much the food as it is having a pretty place where guys can watch the game while pretending to listen to their dates. "No baby, this isn't a sports bar, this is a refined gastropub. Here, have another "Strawberry Steel" (Ketel One, Cointreau, Guava, Sake, Fresh Strawberries)... And could you just tilt your head a little to the right? Touchdown!" 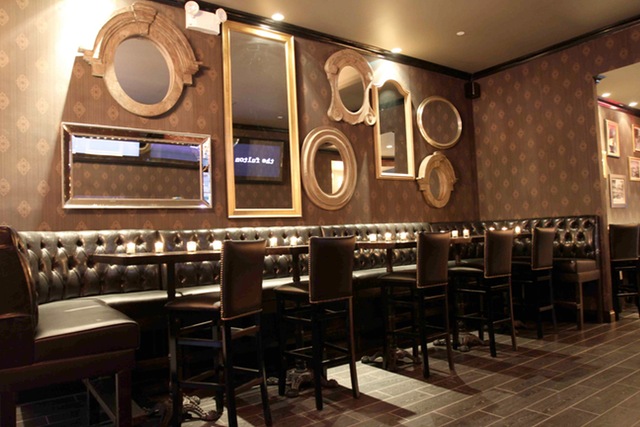