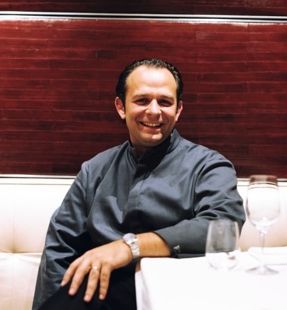 20 years ago this summer, Fabio Trabocchi started his culinary career in the Marche region of Italy. The chef-to-be was fourteen at the time, and found himself occupied with odd jobs such as shucking mussels, cutting vegetables, and even serving as ad hoc valet at a small restaurant close to the beach. Next month marks Trabocchi’s one-year anniversary at SoHo restaurant Fiamma, where, with a kitchen staff of 12, he serves plates like Burrata di Andriawith olive oil and radish salad, and black mission figs with pea tendrils and sautéed porcini mushrooms. Fabio Trabocchi won a Best Chef award from the James Beard Foundation in 2006 for his work at the McLean, Virginia restaurant Maestro, and also won a Best New Chef award from Food & Wine in 2002. The chef spoke with Gothamist last Friday morning at Fiamma, on Spring Street.

Before you came to Fiamma, you were the chef at a place called Maestro in DC, where you won a Food and Wine Best New Chef award in 2002 when you were 28. As a restaurant chef, how does Washington stack up against New York? I love Washington, and especially Maestro, which was a very special, unique place. It was a total destination restaurant. We built that status, and it became almost like having a lot of guests at my home. Eating out is a bit different when you’re a destination – people want to let go, spend more time, indulge. In New York, you have to be on your game, and there’s a lot of competition. From a chef’s standpoint, though, in both cities, you have to be on your game.

You do cooking classes once a month here and interact directly with your customers. Yes and that’s something I was doing at Maestro too. It’s good for customers or people that want to be customers, as a way to connect to what goes on behind the scenes at the restaurant. We always take one complex dish from the menu and approach it as the lesson, and then take two dishes that are simpler and good for making at home. There is a great feeling in those classes because there are some people who know how to cook already, and others who are just starting to get into cooking. There are always a lot of questions. It’s interesting for me, and fun, to meet all these people who are really into food – even though they’re not from our world at all. They’re looking out for diets or they want to know the best place to source an ingredient. As a chef, it makes me feel good.

A lot of your cooking is rooted in the regional food of Le Marche, Italy, the subject of your first cookbook. You write that food from Le Marche is fundamentally different from other Italian food because of its geography, and Greek or North African influences. Your risotto recipe has cinnamon and lemon in it, for example. Exactly. Here’s what happened: historically Le Marche was a region where the economy was completely based on sharecropping, so a lot of families were allowed to live on the farmland of a very rich landlord. The system in place was that some of what was grown went to the landowner, and some was sold at a profit. A lower percentage of that went to the family living and working the land. This sharecropping system isolated the people of Le Marche from the rest of the country, and somehow Le Marche never became a destination like Tuscany, Umbria, or the Amalfi Coast. We had a tremendous amount of spices going through during Medieval times and Le Marche was the place where all taxes were collected. We went through centuries of isolation, dominated by various countries. The result is what I call a modified border cuisine. It’s also a very healthy balanced cuisine with a lot of seafood and inland product coming from the valleys and low mountains.

What does your last name— Trabocchi— mean? I’ve always wanted to find that out, but I didn’t – maybe I should have been more persistent. There were three or four generations of Trabocchis living in Le Marche: myself, my father, my grandfather and my great-grandfather. In Italian, Trabocchi is a strange and interesting word. One of its meanings is something that has spilled over; a spill of water has trabocchato from the glass. Also, Trabocchi is a type of fish net design with a long pole that goes into water from the land and doesn’t require a boat. There are a lot of them in the Costa de Trabocchi. But I don’t know if any of that has anything to do with me having that last name.

Fiamma got 3 stars from the New York Times. It seems like critics in general focus on the authenticity of a restaurant’s menu. In his review, Bruni wrote “Fiamma is about as Italian as a poodle in a Prada scarf.” I see experimentation in your menu— the food you’re creating— but there’s a strong, traditional component here, too. Where do you see the line in your food? It’s like being a man of two worlds. I’ve been lucky to have been born and raised in Italy— most of that is in my first book— but I’ve also spent the last ten or twelve years traveling and being exposed to other countries’ cultures. The traditions of Italian cuisine should be kept authentic, yes, but you should implement your chefs’ knowledge with new techniques and new products at the same time. I allow myself to be creative but I’m not trying to put other cuisines into Italian cuisine; I’m just taking new techniques I learn and applying personal interpretation. That’s when Italian cuisine becomes for Italians – no one would debate whether or not this was Italian in Italy. You don’t need a red and white checkered tablecloth and a bowl of spaghetti with tomato sauce to be Italian.

In the press, there’s this perception of French influences in your food, specifically. All the reviews try to compare what we cook at Fiamma to French food, which is funny because I never worked in France. I’ve been to France only twice: one weekend with my wife, who was then my girlfriend, when I was working in London. And another time, I drove by France when I was on my way to work in Spain with my wife [laughs]. I never worked under a French chef – even though I wanted to as a young chef, I never did.

I heard that you brought a couple of cooks with you from Maestro. We closed Maestro on August 18th last year. We had a tight, strong team, and I felt responsible for all of them – I was putting all of their jobs in jeopardy by leaving, so 12 of them came to New York with me.

Would you consider bringing someone from Le Marche, where you’re from, to work here? Definitely. It’s harder and harder with immigration, though.

What’s your advice for a young cook? Be really dedicated to your craft, even when things get difficult. Things can be really difficult for a young chef. What’s good these days is that you see who’s out there and figure out who you want to work for. Back in my day it was all word of mouth – you worked for someone and hoped they knew someone else. I think a young cook should focus and work for just a couple of chefs that he respects and be consistent. Not just three months here and six months there. Also, it’s not just about cooking, it’s about other things too – philosophy, service. Make a list of two or three chefs, work for them, and those chefs will become the foundation of your knowledge.

How is working with food in New York, where everything is shipped in from outside the city and there aren’t lot of green spaces? In Le Marche, with the seasons, acorn-eating wild boars, turkeys, truffles, fennel pollen floating around, it basically seems like your environment tells you what to eat and when. It really is like that. I’m dressed like this because I just got back from the greenmarket. I like to rely on it and I rely on it tremendously to tell me what to make. Especially when it starts to really kick off like it did a month ago, going until the end of September. I think you always have to use the food in your area, first, it doesn’t travel and it’s the best. It hasn’t been handled too much.

I read that you worked in Moscow when you were younger. I did. It was a very short experience there when I was 21. I had just finished my first chef experience, and a chef whom I had worked for in the past for free called and asked me to help out – it was an adventure.

Were ingredients hard to find? Really hard. Really, really hard. It’s not the case anymore. It’s a tremendous departure from those days. But then, in the market, there was nothing. I mean, we found our way around. There was fish from the Black Sea, and planes from Rungis in France that came twice a week.

Were those planes illegal? There were a few interesting things you needed to know at the airports, yes.

Is there a restaurant in the city you like for a meal after hours? Well, right here is Blue Ribbon, of course, and then there’s The Spotted Pig. Lately, I’ve been going to Gottino. I think what they’re doing is really nice.

What’s your favorite thing to eat in the summer with just a couple of ingredients? I like to eat melon and peaches, which are always on my counter. And I can fix anything with olive oil.

Do you have a strange, “Only in New York” story?
When you’re in the restaurant business you think you’ve seen a lot and not a lot surprises you. But we had a customer one night working the dining room like it was his restaurant. Then he put his food on the chair and was looking at the mirrors and screaming at everybody, “I look so good tonight! I look so good!” I thought that was unique. That was a good one.