The fast-casual BK Lobster opened this past weekend in Bed-Stuy, trumpeting the tagline: "Experience Lobster Rolls the Brooklyn Way." The menu features a dozen different varieties of that dish which, it must be said, is a bit more Maine than Kings County (though we do love our lobster rolls here). While there's nothing inherently Brooklyn about lobster rolls, the menu is inspired by different neighborhoods in the borough: the Bay Ridge Roll (served with Italian style roasted red peppers), or the Coney Island Roll (served with "theme park coleslaw"), the Fort Greene Roll (served with greens), and so on. Prices are on par with most lobster rolls, running from $18 and up (no fries or chips).

So what's going on here? As owner and Master Franchise Developer (yes, you can open your own) Rodney Bonds explains, "The Borough of Brooklyn, also known as BK, is one of the coolest, most respected places in the world [and] the finest cuisine has always been and will always be Lobster. So, with the love for Brooklyn and Lobster it was only right to combine these two powerful names into one. That's a winning brand name." This is from the restaurant's website, which has no menu, or hours listed, or address, but does include a 13-page Investment Deck (and information on how to open your own BK Lobster shop).

A bonus for future owners (but maybe not the customer): "The process to operate a BK Lobster is simple and streamlined," writes Bonds, "with no heavy restaurant equipment or complex restaurant operations, it requires no skilled labor, no chefs, etc." In other words, there's no real kitchen here—so no expensive ventilation, fire suppression, or gas-line equipment required—which also means there's no, say, french fries. And no need to hire anyone who knows how to cook. The big salad chains have made a fortune following this model. 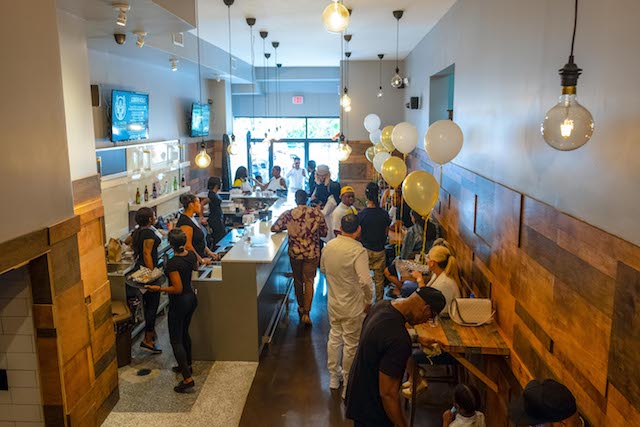 Here's what you need to know as a customer: BK Lobster, located on Nostrand Avenue, features a narrow space with three levels: the ordering counter near the entrance, a dining room with proper tables and chairs next, and a VIP-esque lounge up top. The hallway to the bathroom gets amusingly clubby with its lighting, and on opening day there was a live DJ (the place is available for party rentals) and lots of gold and white balloons.

I consumed three rolls at the new spot, and the Bed-Stuy B.I.G.G.I.E. Roll was quite good, the soft brioche-style bun overflowing with knuckle, tail, and claw meat, with just a slight drizzle of butter sauce giving it a little punch. If you're craving lobster, this definitely does the trick. Any sense of balance disappeared with my other selections, however. In the Flatbush Roll my poor crustacean was completely submerged in jerk sauce, and the baseline Classic was unpleasantly slick with mayo, the lobster lost in the bread and grease.

BK Lobster also got some attention last week for its $100 Golden Lobster Roll, which the menu says consists of the meat of three tails wrapped in 24k gold leaf. I was briefly tempted to get this, just for a photograph and to tell you what a waste it was, but we both already know that gold doesn't make lobster (or anything) taste better.

One odd quirk of BK Lobster: all of the toppings and spreads—the butter sauce, the mayo, the "bacon" on the "V-BLT"—are vegan. But lobster, of course, is not. A bonus, I suppose, for neighborhood vegans who cheat for lobster.