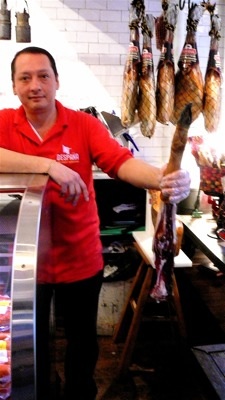 Spanish ibérico ham used to be banned in the United States because of USDA restrictions. However, as part of a newish approval process, the first shipments of the stuff arrived last week at New York stores Despaña and Dean & DeLuca. The former is selling free range sliced ibérico at $90-$99 a pound, and the latter has some of the fancier bellota ham at $75 a pound. More ibérico ham is on the way- in fact it’s already at the airport. “It has to clear customs first,” said Angélica Intriago, Despaña’s co-owner. “We’re at the top of the waiting list.”

While the price is steep, this ham isn’t gimmick food, like gold leaf dessert nonsense or a claptrap martini doused with transition metal: Each ibérico ham takes a lot of care and a little more than 2 years to produce. Nondescript warehouses in Salamanca, Spain, are literally filled with curing hams requiring individual attention throughout the long process. Each ham also has a nametag bearing the name of its eventual recipient. The curing houses are kind of like weird, artisanal nurseries.

Despaña received a shipment of a few bone-in and boneless ibérico hams- including 2 whole legs- on Saturday morning and started selling them that afternoon at $99 a pound (for hand-sliced). First pick went to the Spanish food shop’s restaurant customers, like Mercat and Pamplona, and after that the ham news traveled fast through the city’s underground ham news network (the one that utilizes all those pneumatic tubes). On Monday, Grub Street ran a piece on ibérico as breaking news, and by Wednesday it was almost all gone. Just 1 whole leg and a trimmed down leg bone was all that remained at Despaña Wednesday; the bone was being held for a customer who had paid $35 for it. “He’s probably going to make soup,” said manager Alexander Vélez. “Somebody wanted another bone for an art project,” added another employee as she put a sample plate of idiazábal cheese up on the counter.

This brings us to two final points: First is that a 2 and ½ foot leg bone goes a long way, much farther than a few paper-thin slices of some of the best ham you’ll ever taste. If you’re not in the position to afford cold cuts nearing the $100 a pound mark, securing a leg bone from Despaña might be the next best thing: With enough patience (and if it’s your thing), you can make the best ham stock imaginable.

The second point is that between the Despaña’s daily roster of free samples and its towering wall of jarred, canned, and bottled Spanish provisions – everything from $1.50 packets of cuttlefish ink; onion marmalade, and sweet piquillo peppers – the store remains one of the best grocers of any kind in NY. They also cook a small snack menu using mostly only products sold in-store: All of the bocadillos (from Serrano ham to chorizo to a white asparagus vegetarian option) are under $10, and frothy café con leche costs $3.50.

Photo: Alexander Vélez with an ibérico ham bone at Despaña.

#art
#breaking
#breaking news
#food
#grub street
#new york
#On Monday
#technology
#the city
#united states
#Wednesday
Do you know the scoop? Comment below or Send us a Tip