Expensive Coffee, Now Actually Worth it 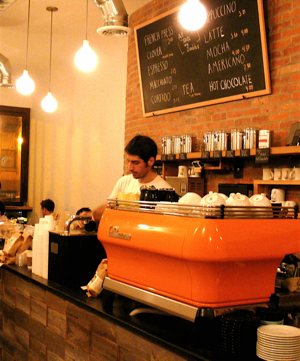 In January, a roving monster with some real nasty lice terrorized Manhattan yuppies in Cloverfield. A few weeks later, the $11,000 Clover coffee machine began showing up in the press to devour yuppie wallets.

El Beit in Williamsburg owns one of 6 such machines in the five boroughs. It charges “Market Price” – anywhere from $2.75 to $3.50 – for a choice of brew made with beans distributed through North Carolina’s Counter Culture. From the front counter, El Beit’s Clover-in-residence is compact and nondescript, something like a high school chem-lab sink next to the behemoth La Marzocco espresso console, which looks like a small orange sports car parked in the middle of the store.

Making a cup on a Clover is downright ritualistic, apparently. Beans are pre-portioned in glass jars, ground to order, and lowered on some round sacrificial platform into the center of the machine. When it’s all over, the wet grinds are squeegeed away and you’re handed a giant cup. The resulting coffee has a fundamentally different taste; it’s something like coffee consommé, but not clear.

At El Beit, cookies and other crumbled things are being supplied by Park Slope’s Blue Sky Bakery. Dr. Frankenstein-esque filter baskets and ceremony aside, El Beit’s coffee has a much bigger reward: the service that comes with each cup. While “nose” and tasting note words like citrusy may come up at the point of sale, the staff at El Beit never seem to make customers feel like they’ve stumbled into an elitist coffee geek clubhouse.

Photo: El Beit. It's expensive, but they're not dicks about it.

#clover
#cloverfield
#coffee
#counter culture
#El Beit
Do you know the scoop? Comment below or Send us a Tip