Everyone Says Gennaro Lombardi Brought Pizza To NYC. What This Blog Presupposes Is... Maybe He Didn't?

Update below: The well-documented origin story of New York City pizza goes something like this: in the late 19th century, Gennaro Lombardi immigrated to the United States from Italy, and in 1905, the young, scrappy Lombardi established the first licensed pizzeria in New York City. Despite challenges from a New Jersey pizzeria, the Lombardi's lore is generally accepted as the definitive story.

At least that's what we thought. Earlier this week, the U.S. Pizza Museum at the Roosevelt Collection published an intriguing missive suggesting not only that it's likely that someone else established Lombardi's before 1905, but also that there's a sort of lost generation of pizza makers that came before then. In fact, Lombardi's, originally located at 53 Spring Street (or 53 1/2, depending on the source) may not have even been the first pizzeria in the U.S.

The new information comes from research that Peter Regas has been conducting for a decade, and that will be a part of his forthcoming pizza history book. Regas, a Chicago-based statistician and independent researcher, has always been a self-described "archive rat." "I’m just drawn to the search and the discovery process of going through the archives," he tells Gothamist.

Regas's work on alternate slice history stemmed from a newspaper article about Chicago pizza, which he noticed while waiting for a sandwich at the deli one day in early 2009. "The way Chicago pizza history in general gets told...is the Pizzeria Uno story," he says. "They have more of a corporate history, even how that started was divorced from the local Italian-American community that existed there before the turn of the century." By contrast, New York's pizza history is inextricable from the Italian-American community that forged it.

Regas thought that he'd be remiss to not look into New York pie-slingers of yesteryear, even though his initial curiosity focused on Chicago. The Newberry Library, where he'd been doing much of his research, happened to have New York City directories from the era. "So I looked for Gennaro Lombardi, the biggest name in the history of pizza in the U.S." in the 1903 to 1908 directories, he says. That turned up nothing. Neither did a search in a 1910 business directory, where Lombardi would likely have been listed if he'd have been the proprietor of the Spring Street pizzeria that year.

So Regas looked up bakers one by one, hoping he'd find Lombardi's name next to the pizzeria's address. Eventually he did find the address, just not under Lombardi's name. Instead, it was listed under Francesco D’Errico. "And that changed the whole direction of my project, because I never knew that name," he says. "And I thought I knew the story well."

That's not to say Lombardi's part of the story isn't legit—it just means that more people may have been involved in NYC pizza-making earlier on than expected. "In this little slice of time Fracesco D’Errico was there at 53 Spring Street as a baker," he says, adding that "it appears Gennaro Lombardi had the business before Francesco as well as the period after." 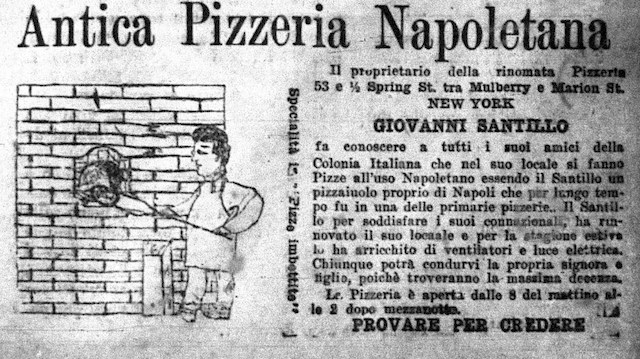 A newspaper advertisement for Antica Pizzeria Napoletana at 53 ½ Spring Street, with one Giovanni Santillo as the proprietor, as seen in the March 25, 1905 issue of Il Telegrafo. [Peter Regas’ scan/New York Public Library]

From there, Regas began learning more about other forefathers of pizza-making, including someone who's now become a focus of his research: Filippo Milone. "It’s likely that he established at least six pizzerias in Manhattan and Brooklyn," Regas says, including John's on Bleecker Street and the now-shuttered Pop's. Through culling together advertisements and other records, Regas's research suggests that what we know about pizza may be different, and more convoluted, than we originally thought.

Update: "It seems likely that [Milone] was operating in pizzerias in Naples before coming to America," he says, noting that he's one of several men of an older generation who had a similar background and took up pizza-making when they immigrated. "It’s not so much the heroic story of a young man who thought it was a good idea to start a pizzeria because they had them in Italy. They had experience in Naples and came with knowledge and experience and a little bit of confidence that this product would be successful."

Scott Wiener, the pizza historian, author of Viva la Pizza! The Art of the Pizza Box and owner of Scott's Pizza Tours in New York, says that serendipitously, he'd been conducting his own research about the origins of pizza-making. The goal, he says, was to both bolster the information on his tours and for a presentation at the NYC Department of Records and Information Services that happened last night. "I started to find there wasn’t confirmation of the information that was out there, and since there wasn’t confirmation, I started following the trail of the buildings. And when the ovens were put in, and who was living there at the time, and who was working there at the time," Wiener tells Gothamist. "And I started to figure out there was more beyond this one guy Gennaro Lombardi."

Poring over the likes of census data, draft cards, and business directories, Wiener says he found that Gennaro Lombardi didn't own the pizzeria until 1908. "So what we know is that Gennaro Lombardi is a huge, important figure in the history of pizza, but he’s not the first owner," he says. "And the story about him getting the first mercantile license is now totally blown out of the water." He adds that they've since taken out information on the tour about Lombardi's supposedly being the first licensed pizzeria, since he has yet to find said confirmation about said license.

Wiener, who has known Regas for several years, says they shared their respective findings with each other earlier this week—lending further credibility to the idea that previous pizzamakers existed in New York City before Gennaro Lombardi. "It’s like I got 60% through the book and somebody told me the ending," Wiener laughs. "Every little discovery was like a little adrenaline rush."

Wiener and Regas's respective research spurs questions about who is remembered in history, and the factors that result in stories being lost to time. D'Errico had ten children, and Milone died in an unmarked grave, and neither of their stories are visible within the context of pizza history. "What about all the people who were there even before that time and didn’t survive, went back to Italy, died, or didn’t have a business that survived for longer than a couple of years, how about them?" Regas asks.

"I believe Filippo Milone was the first pizza man at 53 Spring Street," Regas says, but that he doesn't believe that "53 Spring Street was the first pizzeria in America." As for what he believes is the oldest pizzeria in the U.S., Regas says stay tuned. But while the origins of NYC pizza are up for debate, its enduring deliciousness is not. And its memes are forever.

#filippo milone
#gennaro lombardi
#history
#italian american
#pizza
#pizzeria
#original
Do you know the scoop? Comment below or Send us a Tip